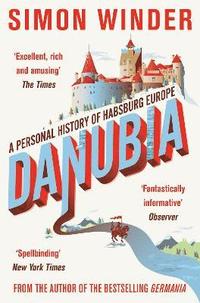 A Personal History of Habsburg Europe

av Simon Winder
Häftad Engelska, 2014-06-19
152
Köp
Spara som favorit
Skickas inom 10-15 vardagar.
Fri frakt inom Sverige över 159 kr för privatpersoner.
Finns även som
Visa alla 2 format & utgåvor
For centuries much of Europe was in the hands of the very peculiar Habsburg family. An unstable mixture of wizards, obsessives, melancholics, bores, musicians and warriors, they saw off - through luck, guile and sheer mulishness - any number of rivals, until finally packing up in 1918. From their principal lairs along the Danube they ruled most of Central Europe and Germany and interfered everywhere - indeed the history of Europe hardly makes sense without them. Simon Winder's extremely funny new book plunges the reader into a maelstrom of alchemy, skeletons, jewels, bear-moats, unfortunate marriages and a guinea-pig village. Danubia is full of music, piracy, religion and fighting. It is the history of a dynasty, but it is at least as much about the people they ruled, who spoke many different languages, lived in a vast range of landscapes, believed in many rival gods and often showed a marked ingratitude towards their oddball ruler in Vienna. Readers who discovered Simon Winder's genius for telling wonderful stories of middle Europe with Germania will be delighted by the eccentric and fascinating stories of the Habsburgs and their world. Danubia was longlisted for the Samuel Johnson Prize for Non-Fiction 2013.
Visa hela texten

Funny and yet also fantastically informative -- Books of the Year * Observer * 'There is travelogue here, with vivid descriptions of Ukrainian towns, and Transylvanian villages. There are snatches of autobiography too, often anecdotal and whimsical, but sometimes filled with passion about his discoveries of art or music. The main quality of this book, however, is its humour, which sets it aside from the standard histories. To say that Winder is a jokey writer would not begin to do him justice . . . And yet, and yet . . . As the chapters roll past in their gales of hilarity, Winder manages at the same time to do something remarkably skilful, handling complex issues of geopolitics, national identity and cultural change with a deep and surprising thoughtfulness' Sunday Telegraph, Book of the Week 'Winder is an engaging host . . . The Habsburgs were, latterly, authoritarian liberals. They survived by guile and luck, by sheer chance and cold expediency. With the exceptions of figures like Rudolf II, that melancholy devotee of the occult, there are few of them one can imagine a novelist wanting to explore. Yet Winder rightly enthuses over the contribution this odd political amalgam made to culture . . . Danubia is astoundingly smart and negotiates the Scylla of elegy and the Charybdis of denunciation with expert skill. It's also damn funny, and includes dodos, the banning of cribs, cockatrices and the entire history of Europe' Stuart Kelly, Scotland of Sunday 'Danubia is a logical sequel to Simon Winder's quirky and delightful Germaina . . . Political and military history supplies Danubia with its narrative line, but Simon Winder loves to explore the byways and odd corners of this rambling empire. He is excellent on architecture, painting and music. Never averse to putting himself at the centre of what he discovers on his travels, he has written a book that is every bit as entertaining and enlightening as Germania . . . Anyone with an interest in a part of Europe and a section of history largely ignored in our schools and universities will find this book richly rewarding' Allan Massie, Literary Review The high plateau of my year was my catching up with Simon Winder. Danubia and Germania are an idiosyncratic, often funny fusion of history writing, travel writing and disrespect -- Sir Tom Stoppard * TLS * 'Danubia is 500 years of Habsburg imperial history told in the style of a bumbling English detective, the kind of sleuth who appears to skirt around a knotty case and then disarmingly poses a penetrating question . . . As with his previous work Germania, Winder describes this account as a "personal history", allowing him space for whimsy, for a great deal of Haydn, for careful analysis of paintings and the freedom to favour certain emperors because they were interesting people rather than political heavyweights. It all makes for an excellent, rich and amusing read' The Times, Book of the Week 'Memorably funny . . . wonderfully readable and entertaining' Sunday Times 'A fresh look at a region and a dynasty of which most of us in the English-speaking world are quite ignorant' Guardian 'It combines history, travelogue and digressive personal essay. Winder is a puppyishly enthusiastic companion: funny, erudite, frequently irritating, always more in control of his material than he pretends to be, and never for a moment boring . . . Danubia is a moving book, and also a sensuous one . . . Miniaturist in its eye for detail, grand in its scope, it skips beats and keeps our attention all the way' -- Sarah Bakewell * Financial Times *

Simon Winder is the author of the highly praised The Man Who Saved Britain and the Sunday Times top ten bestseller Germania. He works in publishing and lives in Wandsworth Town.