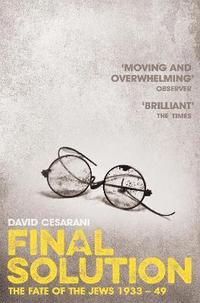 av David Cesarani
(1 röst)
Häftad Engelska, 2017-01-10
219
Köp
Spara som favorit
Skickas inom 3-6 vardagar.
Fri frakt inom Sverige för privatpersoner.
Finns även som
Visa alla 1 format & utgåvor
David Cesarani's Final Solution is an intelligent and thought-provoking short history of the Holocaust. Not only does David Cesarani draw together and engage with the latest scholarly research, making extensive use of previously untapped resources such as diaries and letters from within the ghettos and camps (many of them in Polish or Yiddish and therefore previously largely inaccessible to Anglo-American scholars) but by adopting a rigorously Judeocentric approach the whole narrative of the march to genocide and its aftermath the book presents a subtly different timeline which casts afresh the horror of the period and engenders a significant re-evaluation of the how and why. Eschewing some of the more fevered theses about the guilt of the perpetrators (and indeed recasting how wide that net should be spread), David Cesarani's measured and skilful negotiation of a crowded field is, as a result, all the more devastating.
Visa hela texten

Ultimately, the book's greatest strength lies less in rewriting the Holocaust then in chronicling it with vivid and synoptic vision . . . few if any have traced as well as David Cesarani does the global skeins of influence, ideas and power on which Jewish fates hung. -- Mark Roseman * Times Literary Supplement * With his clear, detailed analysis, Cesarani has written a definitive study of the Holocaust that succeeds in bridging the gap between academia and popular understanding. -- Lisa Pine * BBC History Magazine * It is difficult not to be first moved and then overwhelmed by the mere listing of what happened, and in this respect Cesarani has fulfilled his ambition of reclaiming the killings of the Jews for another generation. * Observer * Lengthy, compelling and devastating . . . a powerful and intensely moving account, drawing on the diaries and letters of those who suffered and died as well as the historical accounts and bland instructions of the remorseless killers. * Irish Independent * Traces a path across a vast mass of material - new and old - demonstrating with urgency and verve how Hitler's progress towards mass extermination of the Jews was never pre-planned or preordained . . . utterly convincing . . . One of Cesarani's most remarkable achievements is to reinvigorate this monstrous narrative -- Sarah Helm * Daily Telegraph * With his ability to bring coherence to the confusion of genocide and connect those narratives to geopolitical events, Cesarani makes us rethink the Holocaust * Prospect * A masterpiece . . . dense with fascinating detail, so very well written, and so passionately and compellingly argued * Jewish Chronicle * Masterly . . . Final Solution will take its place among the most authoritative surveys of the persecution and murder of European Jewry in the Second World War * Financial Times * This is an elegantly written, honest and plausible account and it deserves to be widely read and reflected upon in a continent where racial and religious prejudice is not as far below the surface as we would like to think. Final Solution is a fitting monument to a fine historian and a fine human being. -- Richard Overy * Literary Review * A brilliant synthesis and interpretation of the greatest crime of the modern era . . . There is so much of value in this harrowing and extraordinary book that it's hard to encompass in a review . . . There are stories here I didn't know and could scarcely have imagined . . . A book that demands to be read and deserves every historical award going. -- Oliver Kamm * The Times *

David Cesarani was internationally recognized as one of this generation's leading Jewish and Holocaust scholars. He was research professor in History at Royal Holloway. He was nominated for a Golden Dagger and was a finalist for the US National Jewish Book Award for History in 2009 for Major Farran's Hat. His biography of Adolf Eichmann was winner of the National Jewish Book Award in 2006 and has been translated into a dozen languages. Earlier books include an acclaimed biography of Arthur Koestler (1998) and the controversial Justice Delayed (1992), the story of how Britain became a haven for Nazi war criminals after the end of the war. He had extensive broadcasting and print media experience. In 2005 he was awarded an OBE for his work in the establishment of Holocaust Memorial Day in the UK and was a trustee of the Holocaust Memorial Day Trust. He also serves on the UK delegation to the International Task Force for Holocaust Remembrance, Education and Research. Final Solution: The Fate of the Jews 1933-1949 was published posthumously in January 2016.