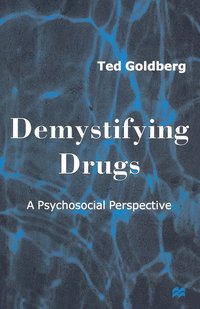 av Ted Goldberg, Jo Campling
Häftad Engelska, 1999-07-01
649
Köp
Spara som favorit
Skickas inom 10-15 vardagar.
Gratis frakt inom Sverige över 159 kr för privatpersoner.
Finns även som
Visa alla 2 format & utgåvor
Based on extensive participant observation research, a life-history model is presented to explain why very few of those who come into contact with narcotics become problematic consumers; that is make drugs one of the most central elements in their lives. The model covers four stages in the deviant career; two preceding and two subsequent to the individual's narcotics debut. Prohibition and harm reduction as models for intervention are presented, and the implications for drug policy of the life-history model are discussed.
Visa hela texten

TED GOLDBERG was awarded an undergraduate degree in anthropology and sociology from Uppsala University in 1967. In 1973 he received his Ph.D. in sociology from the same school. From 1970-75 he was Assistant Professor at the Sociology Institution of Uppsala University, and then held the same position for three years at OErebro School of Social Work. After a year at the R & D Department of The Swedish National Board of Universities and Colleges, he joined the faculty at the Department of Social Work, Stockholm University in 1979. He is currently Associate Professor there. Combining anthropological methodology with sociological theory Ted Goldberg has done extensive participant observation research on the narcotics scene in Stockholm. This has provided a basis for two books and several articles on drugs.