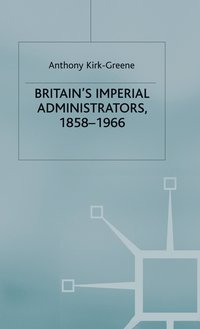 av Anthony Kirk-Greene
Inbunden Engelska, 2000-02-01
1849
Köp
Spara som favorit
Skickas inom 5-8 vardagar.
Fri frakt inom Sverige för privatpersoner.
Britain's famous overseas civil services - the Colonial Administrative Service, the Indian Civil Service and the Sudan Political Service - no longer exist as a major and sought-after career for Britain's graduates. In this detailed study the history of each service is presented within the framework of the need to administer an expanding empire. Close attention is paid to the methods of recruitment and training and to the socio-educational background of the overseas administrators as well as to the nature of their work. The prestigious incumbents of Government House are revealingly examined. The impact of decolonisation on overseas officials and the kinds of 'second careers' which they took up are documented. This authoritative narrative history is enlivened by recourse to Service lore and anecdotes.
Visa hela texten

'...a comprehensive, nuanced understanding of the grass-roots rulers of empire.' - Albion '...Kirk-Greene's study is tremendously strong on detail, and is particularly valuable for that.' - Gordon Johnson, The Times Higher Education Supplement 'Meticulous and impressive.' - West Africa

ANTHONY KIRK-GREENE served in the Indian Army in the Second World War and then went up to Cambridge University. He joined the Colonial Administrative Service in 1950, working in Northern Nigeria as a District Officer from 1950-60 and then at Ahmadu Bello University, Zaria. In 1967 he was elected Senior Research Fellow at St Antony's College, Oxford, and in 1980 became the first holder of the University's Lectureship in the Modern History of Africa. He was President of the African Studies Association of the UK, 1988-90. He has lectured widely in American and Canadian universities. On retirement in 1992 he was elected to a Leverhulme Emeritus Fellowship, during which he wrote the present book (his 27th). He is currently Adjunct Professor at the Stanford University Centre in Oxford and an Associate Editor of The New Dictionary of National Biography. He has recently published an anniversary history of the Colonial Service, On Crown Service.

Contents List of Tables List of Maps Introduction Anatomizing the Making of the Generic District Officer An Empire to Administer: the Metropolitan Officer On Company and Other Crown Service Overseas The Indian Civil Service, 1857-1947 The Colonial Administrative Service, 1895-1966 The Sudan Political Service, 1899-1955 Preconsuls at the Top The Transfer of Power and Localization Notes Bibliography Index