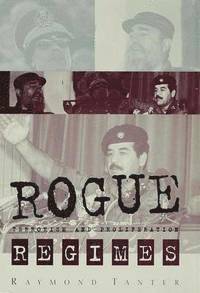 av Raymond Tanter
Inbunden Engelska, 1998-01-01
1709
Köp
Spara som favorit
Specialorder (osäker tillgång). Skickas inom 11-20 vardagar.
Fri frakt inom Sverige för privatpersoner.
During the Cold War, the Soviet Union served as the predictable adversary of the US government. Now that the Cold War has ended, a threat which matches the scope of the USSR is no longer believed to exist, but still smaller countries continue to torment US leaders. The governments of these countries are considered the outlaws of the international system, whether due to their support for terrorism or their interest in nuclear weapons. In this work, Raymond Tanter explores US foreign policy with regard to nations such as Iran, Iraq, Syria, and Libya, uncovering the reasons why these countries are so menacing to the United States. In addition, Tanter examines US policy toward governments in Cuba and North Korea, which continue to promote their own forms of communism.
Visa hela texten

'In the aftermath of the Cold War, new threats confound the United States. The menace of terrorism and the hazard of proliferation are but two dangers we face as the twenty-first century dawns. Rogue Regimes is a blueprint on the road to national security. Raymond Tanter creatively specifies scenarios as well as policies for the Western alliance to meet the threat from outlaw states.' - Alexander M. Haig, Jr. former US Secretary of State 'But the compelling reason for the American government to punish certain states with economic sanctions is the moralistic belief that sinners should receive their just deserts - especially if influential groups of American voters are pushing for such punishment.' - Economist 'A decade after the end of the cold war a new type of threat has emerged to 'confound' the US. A group of rough regimes, Tanter tells us, armed with nuclear and/or chemical weapons ruled by ruthless, recalcitrant, and often paranoid leaders, has replaced the Soviet Union and communism as the greatest challenge to American primacy and long-term international stability.' - Financial Times 'A former official with the Reagan administration in the early 1980s, Tanter gives the reader some rare insights into the processes of high-level decision making.' - Eric Watkins, International Affairs 'Tanter's accounts of the infighting (in Washington) offer illuminating insights into the decision-making process.' - Washington Post

RAYMOND TANTER is Professor of Political Science and Research Associate at the Middle East Center at the University of Michigan. He served at the White House on the National Security Council staff, 1981-82. In 1983-84 he was Personal Representative of the Secretary of Defense to arms control talks in Helsinki, Madrid, Stockholm and Vienna.