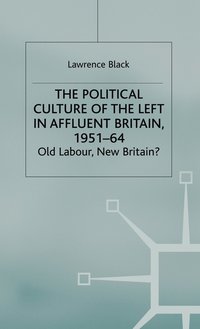 The Political Culture of the Left in Affluent Britain, 19 51-64

The Political Culture of the Left in 'Affluent' Britain, 1951-64

av L Black
Inbunden Engelska, 2002-12-01
1589
Köp
Spara som favorit
Finns även som
Visa alla 1 format & utgåvor
Exploring relationships between politics, the people and social change, this book assesses the fortunes mainly of Labour, but also of the Communist Party and the New Left in postwar Britain. Using concepts like political culture, it looks at the left's articulation of 'affluence': consumerism, youth culture, America, TV, advertising and its disappointment at the people under the impact of such changes. It also examines party organization, socialist thinking and the use of new communication techniques like TV, advertising and opinion polling.
Visa hela texten

'Dr Lawrence Black has explored in great depth why the left in Britain failed to address head-on the massive social change of the 1950s. Throughout he provides the reader with fascinating glimpses of how the new culture of affluence produced a series of conflicts with the left's traditional ethos. His book is a fine example of the 'new political history' which has re-invigorated labour history over the past decade.' - Stefan Berger, Professor of Modern and Contemporary History, University of Glamorgan 'If you want to understand why Labour has re-branded itself as 'New' you should read this compelling study of Old Labour...This is a timely study of what happens to a party which loses touch with the voters.' - Professor Patricia Thane, School of Social Sciences, University of Sussex 'This is an innovative study that significantly extends and deepens our understanding of post-war British politics...To those who erroneously believe 'New' Labour began in 1994 this book proves that many of the debates that still obsess the Left at the start of the twenty first century can be traced back to when Britons first emerged from post-war austerity into an era of unparalleled plenty...[O]f great interest to those wishing to understand British poltics and culture in the second half of the twentieth century.' - Steven Fielding, University of Salford

LAWRENCE BLACK wasa Research Fellow at the University of Bristol and in 2002-3 Fulbright-Robertson Visiting Professor of British History at Westminster College, Missouri.