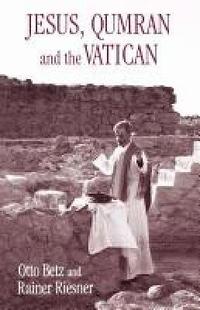 Jesus, Qumran and the Vatican

av Otto Betz, Rainer Riesner
Häftad Engelska, 1994-02-01
319
Köp
Spara som favorit
Skickas inom 10-15 vardagar.
Fri frakt inom Sverige för privatpersoner.
Did the Vatican suppress the publication of the Dead Sea Scrolls? Why has there been such a delay in making them public? Do they radically call in question the Christian understanding of Jesus? These and many other questions have been asked in recent popular books, and there have been charges of fraud, deceit and cover-ups. In Jesus, Qumran and the Vatican, two distinguished German scholars examine these issues and more, producing a highly readable and reliable account of the present state of research on the Scrolls and their significance and implications for Christianity. The result is a scholarly mystery tale which readers will not be able to put down. `A courageous refutation of absurd assertations, half-truths and lies about the Qumran scrolls, the origins of Christianity and the Catholic Church' (Martin Hengel, University of Tubingen). `A telling refutation of the fantastic and extraordinary claims recently made about the Dead Sea Scrolls and their relation to Jesus of Nazareth, early Christianity and the Vatican' (Joseph A. Fitzmyer, SJ, Catholic University of America). `Critics claim the Dead Sea Scrolls prove that the church's portrait of Jesus is grotesquely inaccurate. Other contend that the Vatican has been "hiding" the Scrolls because they would damage the faith of Christians. In an informed and engaging way, Betz and Riesner now speak to these concerns and reveal who are the fools' (James H. Charlesworth, Princeton Theological Seminary).
Visa hela texten