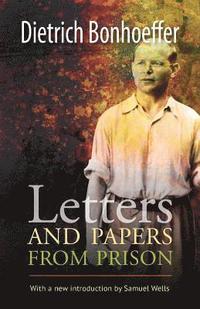 Letters and Papers from Prison

av Dietrich Bonhoeffer
Häftad Engelska, 2017-02-28
269
Köp
Spara som favorit
Kan tyvärr inte längre levereras innan julafton.
Finns även som
Visa alla 6 format & utgåvor
One of the great classics of prison literature, Letters and Papers from Prison effectively serves as the last will and testament of the Lutheran theologian Dietrich Bonhoeffer, executed by the Nazis after incarceration in Tegel Prison. Acute and subtle, warm and perceptive, yet also profoundly moving, the documents collectively tell a very human story of loss, of courage, and of hope. Bonhoeffer's story continues to be as vitally relevant, as politically prophetic, and as theologically significant, as it always has. This edition includes a new introduction by Samuel Wells
Visa hela texten

Dietrich Bonhoeffer (1906-45) is one of the most influential Protestant theologians of the twentieth century. His death at the hands of the Nazis has made him a modern martyr and an icon of radical Christianity. Samuel Wells is Vicar of St Martin in the Fields, London and a renowned public theologian. He is well-known for his broadcasting and writing, and is the author of more than thirty books.