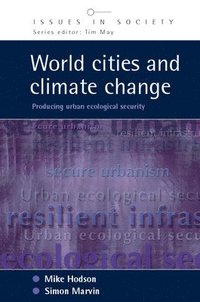 av Mike Hodson
Häftad Engelska
339
Köp
Spara som favorit
Skickas inom 5-8 vardagar.
Fri frakt inom Sverige för privatpersoner.
Relationships between cities and energy, water, waste and transport networks are changing. world cities and climate change argues that this is not something that is happening naturally but is the product of social, economic, political and spatial processes and that these changes have profound implications for the shape of contemporary and future cities. drawing on research and examples from london, new york, tokyo, melbourne, shanghai, san francisco and other world cities, mike hodson and simon marvin pose a critical question: They develop a critical synthesis of dominant, new infrastructure styles that they argue are emerging as responses to the systemic pressures of climate change and resource constraint confronting cities and networks. The book outlines the key elements of these new strategies and critically assesses their implications and relevance to other urban contexts. World Cities and Climate Change is key reading for students, academics, researchers and policy makers with an interest in urban politics, technology and ecology.
Visa hela texten

Mike Hodson is Research Fellow at the Centre for Sustainable Urban and Regional Futures (SURF), University of Salford. His research interests focus on urban transitions to low-carbon economies, the ways in which this may or may not happen and understandings of the lessons to be learned from such processes. Mike has developed projects around this agenda funded by the European Commission, UK research councils and sub-national government. Simon Marvin is Professor and Co-Director of SURF which is a mainly self-financing inter-disciplinary research centre within the University of Salford, established in 1999. He is an acknowledged national and international expert on changing relations between neighbourhoods, cities, regions and infrastructure networks in a period of rapid technological change, environmental concern and institutional restructuring. Simon's research has been funded by the UK ESRC, EPSRC, the European Commission and a number of commercial funders and public agencies.