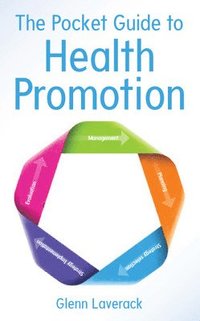 The Pocket Guide to Health Promotion

av Glenn Laverack
Häftad Engelska, 2014-07-16
259
Köp
Spara som favorit
Skickas inom 7-10 vardagar.
Fri frakt inom Sverige för privatpersoner.
The 'pocket guide to health promotion' is a short, punchy and practical guide aimed at students and practitioners. The book includes precise definitions and examples of key concepts and methods in health promotion practice and a chapter by chapter description of the management planning, strategy selection, implementation and evaluation of health promotion programmes. written in an accessible and concise style, the book offers the reader a practical and flexible resource that is ideal for students and practitioners looking to plan and implement health promotion activities. a must buy for those new to health promotion or who want a pocket guide to this core health activity. "Clearly written and practical, this excellent guide will prove indispensible to practitioners of health promotion globally, and a very useful starting point for students. It will be worth buying a pocket to put it in!"
David Ross, Professor of Epidemiology and International Public Health, London School of Hygiene and Tropical Medicine, UK "The Pocket Guide to Health Promotion is easy to navigate with complex concepts in health promotion explained in a user-friendly way. whether you are practicing health promotion or studying the discipline, this will be a welcome addition to any book shelf."
Dr James Woodall, Co-Director of the Centre for Health Promotion Research & Course Leader MSc Public Health, Leeds Metropolitan University, UK
Visa hela texten

Dr. Laverack is seen as an international leader in health promotion and has a distinguished career for more than 25 years working in Europe, Africa, Asia, North America and the Pacific regions. He formerly worked as a Coordinator (Empowerment) at the WHO in Geneva and as the Director of Health Promotion at the University of Auckland, New Zealand. He is presently an Honorary Professor of Health Promotion at the University of Southern Denmark.