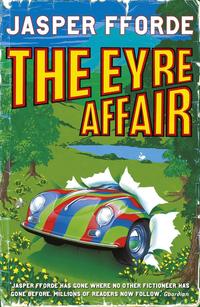 av Jasper Fforde
(5 röster)  |  Läs 4 recensioner
Häftad Engelska, 2001-07-01
129
Köp
Spara som favorit
Skickas inom 7-10 vardagar.
Gratis frakt inom Sverige över 159 kr för privatpersoner.
Finns även som
Visa alla 1 format & utgåvor
There is another 1985, somewhere in the could-have-been, where dodos are regenerated in home-cloning kits and everyone is disappointed by the ending of Jane Eyre. But in this world there are policemen who can travel across time, a Welsh republic - and a woman called Thursday Next.
Visa hela texten

'What Fforde is pulling is a variation on the classic Monty Python gambit: the incongruous juxtaposition og low comedy and high erudition - this scam has not been pulled off with such off-hand finesse and manic verve since the Pythons shut up shop. 'The Eyre Affair' is a silly book for smart people: postmodernism played as raw, howling farce' -- Independent 'It is always a privilege to watch the birth of a cult, and Hodder has just cut the umbilical cord. Always ridiculous, often hilarious ... blink and you miss a vital narrative leap. There are shades of Douglas Adams, Lewis Carroll, 'Clockwork Orange' and '1984'. And that's just for starters' -- Time Out 'Ingenious - I'll watch Jasper Fforde nervously' -- Terry Pratchett 'Surely a cult in the making' -- Marie Clare

Jasper Fforde is a freelance commercial director of photography who has worked on such films as 'The Mask of Zorro', 'The Saint' and 'Entrapment'. He has four children and lives for much of the time on a canal boat. He flies a tigermoth aeroplane, loves Biggles and Lewis Carroll and spends his spare time writing stories and making unusual sculptures.