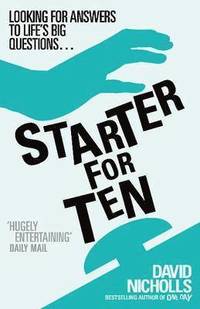 Starter for Ten is the debut of the year; a recommendation repeated by all who come in contact with it ... Trust us, you'll love it * Arena * Nicholls' portrayal of student affectations is accurate and funny ... clever and well-written * Independent * Brilliant... we would recommend it to anyone * Richard Madeley and Judy Finnigan * A funny, touching novel reminiscent of the classic film Gregory's Girl with an authentic 1980s backdrop * Sunday Mirror *

David Nicholls is the bestselling author of Sweet Sorrow, Us, The Understudy and Starter for Ten. One Day was published in 2009 to extraordinary critical acclaim. Published in 40 languages, it became a global bestseller, winning the 2010 Galaxy Book of the Year Award. David was named Author of the Year at the 2014 National Book Awards after his fourth novel, Us, was another no. 1 bestseller and was long-listed for the Man Booker Prize for Fiction. On screen, David has written adaptations of Far From the Madding Crowd, When Did You Last See Your Father? and Great Expectations, as well as turning his own novels, Starter for Ten and One Day, into feature films. His adaptation of Edward St. Aubyn's Patrick Melrose, starring Benedict Cumberbatch, was nominated for an Emmy and won him a BAFTA for best writer. Other works for TV include episodes of Cold Feet, Tess of the D'Urbervilles and two-part love story The 7.39, and he has also adapted his novel Us as a four part drama for BBC1, starring Tom Hollander and Saskia Reeves.