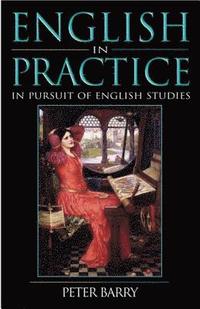 In Pursuit of English Studies

av Peter Barry
Häftad Engelska, 2003-01-01
399
Köp
Spara som favorit
Skickas inom 10-15 vardagar.
Fri frakt inom Sverige för privatpersoner.
Finns även som
Visa alla 3 format & utgåvor
This is a book about English Studies, aimed at all those who are taking English degrees, or teaching them. It gives a detailed account of the core of the discipline - the close reading of texts, contexts, and "intertexts". It also treats some of the major current issues within the discipline, such as the relationship between literature and history. It works through a series of fully developed applied examples, rather than by abstract exposition and exhortation. It is a reflective overview which constanlty exemplifies the practice it reflects upon.
Visa hela texten

Students will find Barry's style clear, honest and informative. Times Higher Education Supplement I cannot imagine a better way for a student of English to start his or her studies than by reading English in Practice. The best thing about Peter Barry's book is that issues of fundemental importance are introduced by means of detailed examples, so that the student reader never need feel lost or out of his or her depth. But at the same time it is a book that forces the reader to think rather than merely to absorb facts and opinions. Lecturers who prescribe this book will surely find that they spend less time introducing basic issues and more time continuing and deepening an exploration that Barry has initiated so effectively. This is a book that will charge a student's intellectual batteries - and probably re-charge those of his or her lecturers. Jeremy Hawthorn, Norwegian University of Science and Technology, Trondheim, Norway The great strength of Peter Barry's English in Practice is its rare combination of common sense and personal, even idiosyncratic judgement as to the value of studying English. Marjorie Perloff, Sadie Dernham Patek Professor Emirtus

Peter Barry has taught English at every level - in primary and secondary schools, in further and higher education colleges, and at universities. He was at the former LSU College, Southampton, from 1980 to 1995, and moved in that year to his present post at the University of Wales, Aberystwyth. He has been co-editor of English (the journal of the English association) since 1988, and reviews and poetry editor since 1995, and he is also an advisory member of the executive of the association. His previous books include Contemporary British Poetry and the City (Manchester University Press, 2000), and the academic best-seller Beginning Theory (2nd edition Manchester University Press, 2002). He also co-edits the Beginnings series for MUP.