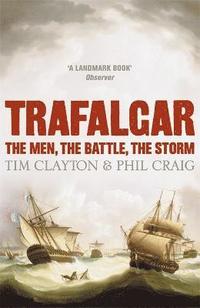 The men, the battle, the storm

av Tim Clayton, Phil Craig
Häftad Engelska, 2005-07-01
179
Köp
Spara som favorit
Skickas inom 7-10 vardagar.
Fri frakt inom Sverige för privatpersoner.
Finns även som
Visa alla 1 format & utgåvor
Two hundred years ago, Napoleon Bonaparte dominated Europe and threatened Britain with invasion. Against him stood the Royal Navy and the already legendary Admiral Horatio Nelson. On 21 October 1805, a massive naval battle off the coast of Spain decided mastery of the seas. Then, over the following days and nights, the battleships and their exhausted crews endured a gale of awesome fury. As Captain Charles Tyler wrote to his wife Margaret, 'the wind blew a perfect storm'. The authors of the bestselling FINEST HOUR tell this story not only through the diaries, letters and memoirs of the men who wrestled with the enemy and the elements, but also through the eyes of their wives and children. Whether you are already familiar with this period of history or are coming to it for the first time, TRAFALGAR is a book that will enthral as it illuminates an event whose repercussions still echo today.
Visa hela texten

'My book of the year is TRAFALGAR ... a gripping account of the events of l805. The characters from both the British and Combined fleets are drawn with such understanding and sympathy that the full horror of the battle became all the more vivid as many of those I'd come to admire were sliced in half by cannon balls or disembowelled by chain-shot and splinters. the story that followed was as monstruos as the fighting that preceded it. The tactics and movements of sea battles are notoriously difficult to explain, but the authors draw the geography of the action with expert clarity.' * Harry Enfield's in <i>Mail on Sunday</I> * A magnificent account of the battle itself, including a detailed analysis of the storm that might well have wiped out the British fleet after victory had been won, had it not been for superb seamanship. * <i>Guardian</I> * Vivid and compelling...an account of significant importance. * <i>Naval Review</i> * The most fluent account of Trafalgar for a generation * <i>Ships Telegraph</i> * Clayton and Craig...have found, among a great trove of participants' vivid letters and diaries, support for a revisionist approach to the Trafalgar legend * The <i>Sunday Times</i> * One of the book's greatest strengths is the attention paid to the "perfect storm" that began only hours after the fighting had stopped and gave rise to incredible acts of heroism and self-sacrifice. * <i>Glasgow Herald</i> * Excellent...comprehensively researched, vividly written and judiciously argued. Wonderfully detailed pen portraits...Much new material from French and Spanish sources gives a rounded picture...compelling. Clayton and Craig have written about conflict before and it shows. * Saul David, <i>Daily Telegraph</i> * If you want just one book that will show how this flood of new material can transform a story you thought you knew, while at the same time keeping you gripped like a page-turner novel, buy TRAFALGAR by Tim Clayton and Phil Craig. * <i>Observer</i> *

Tim Clayton is a specialist in eighteenth-century history; Phil Craig is an award-winning producer of historical television documentaries. The pair have collaborated on two acclaimed books, the bestselling FINEST HOUR and END OF THE BEGINNING.