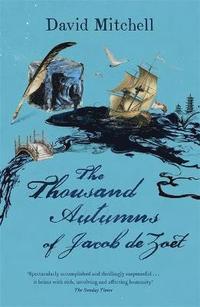 av David Mitchell
(2 röster)  |  Läs 1 recension
Häftad Engelska, 2011-02-08
139
Köp
Spara som favorit
Skickas inom 3-6 vardagar.
Fri frakt inom Sverige över 159 kr för privatpersoner.
Finns även som
Visa alla 5 format & utgåvor
**Pre-order UTOPIA AVENUE, the spectacular new novel from David Mitchell.** The Sunday Times Number One Bestseller, from the author of CLOUD ATLAS and THE BONE CLOCKS. Longlisted for the Man Booker Prize 2010 'Brilliant' - The Times 'A masterpiece' - Scotsman Be transported to a place like no other: a tiny, man-made island in the bay of Nagasaki, for two hundred years the sole gateway between Japan and the West. Here, in the dying days of the 18th-century, a young Dutch clerk arrives to make his fortune. Instead he loses his heart. Step onto the streets of Dejima and mingle with scheming traders, spies, interpreters, servants and concubines as two cultures converge. In a tale of integrity and corruption, passion and power, the key is control - of riches and minds, and over death itself. 'Confirms Mitchell as one of the more fascinating and fearless writers alive' - New York Times Book Review
Visa hela texten

Compared with almost everything being written now, it is vertiginously ambitious - and brilliant * The Times * Lose yourself in a world of incredible scope, originality and imaginative brilliance. -- Katy Guest * Independent on Sunday * A novel which actually deserves the accolade "tour de force". -- Kamila Shamsie, Books of the Year * Daily Telegraph * The most impressive fictional mind of his generation. * <i>Observer</i> * Spectacularly accomplished and thrillingly suspenseful. * <i>Sunday Times</i> * Confirms Mitchell as one of the more fascinating and fearless writers alive. -- Dave Eggers * <i>New York Times Book Review</i> *

David Mitchell is the author of the novels Ghostwritten, number9dream, Cloud Atlas, Black Swan Green, The Thousand Autumns of Jacob de Zoet, The Bone Clocks and Slade House. He has been shortlisted twice for the Booker Prize, won the John Llewellyn Rhys, Geoffrey Faber Memorial and South Bank Show Literature Prizes among others, and been named a Granta Best Young British Novelist. In 2018, he won the Sunday Times Award for Literary Excellence, given in recognition of a writer's entire body of work. In addition, David Mitchell together with KA Yoshida has translated from Japanese two books by Naoki Higashida - The Reason I Jump: One Boy's Voice from the Silence of Autism and Fall Down Seven Times, Get Up Eight: A Young Man's Voice from the Silence of Autism. He lives with his wife and their two children in Ireland.