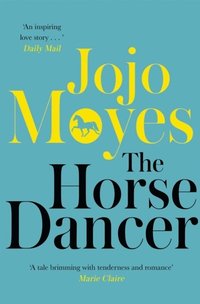 The Horse Dancer: Discover the heart-warming Jojo Moyes you haven't read yet

av Jojo Moyes
(11 röster)
Häftad Engelska, 2010-04-29
99
Köp
Spara som favorit
Finns även som
Visa alla 1 format & utgåvor
The 2009 novel The Horse Dancer by Jojo Moyes, the bestselling author of Me Before You and two-time winner of the RNA Novel of the Year award. In a hidden corner of London, Henri Lachapelle is teaching his granddaughter and her horse to defy gravity, just as he had done in France, fifty years previously. But when disaster strikes, fourteen-year-old Sarah is left to fend for herself. Forced to share a house with her charismatic ex-husband, her professional judgement called into question, lawyer Natasha Macauley's life seems to have gone awry. When her path crosses that of Sarah, she sees a chance to put things right. But she doesn't know that Sarah is keeping a secret, one that will change all their lives forever . . .
Visa hela texten

I had to keep reminding myself that I was not, in fact, reading Dickens . . . Moyes's vision of people lifted from despair by nothing more than love (and a little money) is nothing if not poignant. * Washington Post * A tale brimming with tenderness and romance. * Marie Claire * A strikingly original tale which captivates from the first page. * Daily Express *

Jojo Moyes is a novelist and journalist. Her books include the bestsellers The Girl You Left Behind, The One Plus One, Me Before You and After You and her short story collection Paris for One and Other Stories. Her novels have been translated into forty-four languages, have hit the number one spot in twelve countries and have sold over thirty-eight million copies worldwide. Me Before You has now sold over fourteen million copies worldwide and was adapted into a major film starring Sam Claflin and Emilia Clarke. Jojo lives in Essex.