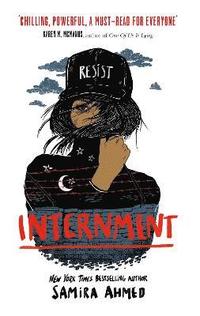 Köp
Spara som favorit
Kan levereras innan julafton!
Finns även som
Visa alla 3 format & utgåvor
'Samira has created a chilling, powerful, all-too-real near future that's a must-read for everyone's TBR' Karen M. McManus, author of One Of Us Is Lying 'A must-read . . . A heart-rending and all-too credible tale of sacrifice, the ugly face of authority and the courage of youth' Sunday Times' Children's Book of the Month 'A tremendous novel' the Guardian Rebellions are built on hope. Set in a horrifying 'fifteen minutes in the future' United States, seventeen-year-old Layla Amin is forced into an internment camp for Muslim-Americans along with her parents. With the help of newly-made friends also trapped within the camp, her boyfriend on the outside, and an unexpected alliance, Layla begins a journey to fight for freedom, leading a revolution against the internment camp's Director and his guards. Heart-racing and emotional, Internment questions the imaginary boundaries that separate us and challenges readers to fight the complicit silence that exists in our society today. 'Chillingly plausible' Financial Times 'If you enjoyed The Hate U Give, this should be at the top of your TBR pile' -- Culturefly
Visa hela texten

Samira has created a chilling, powerful, all-too-real near future that's a must-read for everyone's TBR. * Karen M. McManus, author of One Of Us Is Lying * [A] magnetic novel . . . this is a story that seems uncomfortably prescient in these uncertain times, but it's also one of hope and resistance. Author Ahmed is proving herself to be a YA gem. * Stylist magazine * Very timely . . . A rallying call against the complicity of silence on modern racism * Independent * A timely YA novel set in a terrifying 'fifteen minutes in the future' USA . . . In a world that's constantly creating boundaries and walls between races, religions and nations, Internment is a powerful and relevant book that reads less like a piece of fiction and more a scarily plausible future scenario. Yet what should resonate with readers is the hope at the heart of the tale. If you enjoyed The Hate U Give, this should be at the top of your TBR pile when March rolls around. * CultureFly * Chillingly plausible, a story of hate ultimately becomes one of hope as Ahmed challenges readers to fight the complicit silence of racism. * The Bookseller, Ones to Watch * A tremendous novel. * the Guardian * Chillingly plausible * Financial Times * A powerful and poignant exploration of a nightmare made real. It's a testament to Ahmed's writing then, that the heart of the story is one of hope. Read INTERNMENT. Raise a fist. * David Arnold, New York Times bestselling author of Mosquitoland * A testament to what girls are capable of when they are overlooked, Internment is a masterwork of dignity and grit. * E.K. Johnston, #1 New York Times bestselling author of Exit, Pursued by a Bear * A riveting and cautionary tale. Internment urges us to speak up and speak out, to ask questions and demand answers, and when those answers prove unsatisfactory, to resist * Stacey Lee, award-winning author of Outrun the Moon *

Samira Ahmed is the New York Times bestselling and Indies Introduce author of LOVE, HATE & OTHER FILTERS. She was born in Bombay, India, and grew up in Batavia, Illinois, in a house that smelled like fried onions, spices and potpourri. Samira once spent a year searching for the perfect mango, eventually learning that the quest was always about the journey and not merely the destination. She graduated from the University of Chicago and has taught high school English and worked in education non-profits and on political campaigns. These days, she lives and writes in Chicago, every keystroke reminding her that art is resistance. Find her at www.samiraahmed.com and @sam_aye_ahm