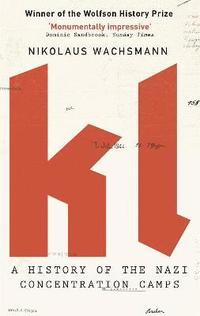 A History of the Nazi Concentration Camps

av Nikolaus Wachsmann
Häftad Engelska, 2016-07-07
179
Köp
Spara som favorit
Skickas inom 10-15 vardagar.
Fri frakt inom Sverige för privatpersoner.
Kan levereras innan jul!
Finns även som
Visa alla 2 format & utgåvor
Winner of the Jewish Quarterly Wingate Literary Prize and the Wolfson History Prize In March of 1933, a disused factory surrounded by barbed wire held 223 prisoners in the town of Dachau. By the end of 1945, the SS concentration camp system had become an overwhelming landscape of terror. Twenty-two large camps and over one thousand satellite camps throughout Germany and Europe were at the heart of the Nazi campaign of repression and intimidation. The importance of the camps in terms of Nazi history and our modern world cannot be questioned. Dr Nikolaus Wachsmann is the first historian to write a complete history of the camps. Combining the political and the personal, Wachsmann will examine the organisation of such an immense genocidal machine, whilst drawing a vivid picture of life inside the camps for the individual prisoner. The book gives voice to those typically forgotten in Nazi history: the 'social deviants', criminals and unwanted ethnicities that all faced the terror of the camps. Wachsmann explores the practice of institutionalised murder and inmate collaboration with the SS selectively ignored by many historians. Pulling together a wealth of in-depth research, official documents, contemporary studies and the evidence of survivors themselves, KL is a complete but accessible narrative.
Visa hela texten

This is both a panoptic and an intimate history of the camps: we get the big picture as well as the telling detail (the SS officer who opened doors with his elbow rather than his hand because he was worried about germs). It is a huge and very necessary contribution to our understanding of this obscene subject. It makes us think anew: about how the camps worked, what it was like in them and how they fitted into the machinery of the state -- Nicholas Lezard * Guardian * A truly excellent book on one of history's darkest moments * History Today * A staggeringly well-informed and enormously moving record of suffering and evil . . .the terrifying lesson of Wachsmann's account is not that any of us might have been an inmate. It is that any of us might have been a guard -- Dominic Sandbrook * Sunday Times * In devastating and undeniable detail, KL sets out the full story of the camps -- Nicholas Shakespeare * Telegraph * Wachsmann's book is a world-making history * London Review of Books * It is difficult to do justice to the brilliance of Wachsmann's comprehensive history . . . engrossing as well as illuminating -- Joanna Bourke * New Statesman * Hugely impressive . . . Wachsmann pulls off a remarkable feat: he not only provides an account of Konzentrationslager, or KL of the books title, he does so in a readable, accessible way. KL represents an acme of what the historical discipline can achieve -- Dan Stone * BBC History magazine * Every page is suffused with humanity and anyone who wants to understand the Nazis should read it * Jewish Chronicle * A work of prodigious scholarship * New York Times * Gripping, humane, and beautifully written * New York Review of Books * [A] magnificent work of scholarship . . . every page of Nikolaus Wachsmann's magisterial account is suffused with humanity * Literary Review * Hugely impressive . . . Wachsmann has produced the standard historical work on the Nazi camps . . . KL represents the acme of what the historical disciple can achieve * BBC History magazine * Wachsmann's meticulous research and unwavering eye for detail is never permitted to detract from the individual human tragedies . . . so much more than another academic record of the holocaust * Good Book Guide * Wachsmann has in effect united the best of the German and the British schools of grand World War II history: hugely but humbly exhaustive research with attention to character and to detailed narrative * Wall Street Journal * Profoundly important . . . exceptional . . . will surely become the standard work on the subject -- Laurence Rees * Mail on Sunday * Monumentally impressive . . . seems certain to become the definitive history of the Nazi concentration camps . . . his scholarship brings new life to a familiar subject -- Dominic Sandbrook * Sunday Times * Telling the story of the KL means facing up to a formidable challenge: how to make the camps relatable, as places where real people lived, worked and died, rather than transcendental symbols of evil? . . . [Wachsmann] proves himself equal to this challenge . . . thanks to Wachsmann's skill as a writer, it manages to be much more than a doleful trudge through a universe of ever-increasing death and terror * Independent * Nikolaus Wachsmann has written an admirable historical overview of the Nazi concentration camps, effectively combining decades of recent scholarship with his own original research. He captures both the trajectory of dynamic change through which the camp system evolved as well as the experiences and agency - however limited - of the prisoner community. This is an impressive and valuable book -- Christopher R. Browning, author of Ordinary Men: Reserve Police Battalion 101 and the Final Solution in Poland This book is a remarkable achievement. Nikolaus Wachsmann has written the first integrated history of Nazi concentration camps, unifying in a single narrative the policies and measures governing the inception and growth of the system, the context in which the mo

Dr Nikolaus Wachsmann was born in Munich, Germany. He obtained a PhD in History from Birbeck College at the University of London and was a joint winner of the Fraenkel Prize in Contemporary History.