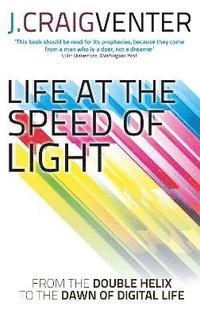 Life at the Speed of Light

From the Double Helix to the Dawn of Digital Life

av J Craig Venter
Häftad Engelska, 2014-08-07
128
Bevaka
Spara som favorit
Tillfälligt slut – klicka "Bevaka" för att få ett mejl så fort boken går att köpa igen.
Finns även som
Visa alla 2 format & utgåvor
In 2010, scientists led by J. Craig Venter became the first to successfully create 'synthetic life' -- putting humankind at the threshold of the most important and exciting phase of biological research, one that will enable us to actually write the genetic code for designing new species to help us adapt and evolve for long-term survival. The science of synthetic genomics will have a profound impact on human existence, including chemical and energy generation, health, clean water and food production, environmental control, and possibly even our evolution. In Life at the Speed of Light, Venter presents a fascinating and authoritative study of this emerging field from the inside -- detailing its origins, current challenges and controversies, and projected effects on our lives. This scientific frontier provides an opportunity to ponder anew the age-old question 'What is life?' and examine what we really mean by 'playing God'. Life at the Speed of Light is a landmark work, written by a visionary at the dawn of a new era of biological engineering.
Visa hela texten

Captivating and essential . . . fascinating . . . a superb and well-articulated book * Biochemist * One of the most talented and influential scientists at work today * Independent on Sunday *

J. CRAIG VENTER is best known for sequencing the human genome. He is the founder, chairman, and CEO of the J. Craig Venter Institute, a not-for-profit research organization dedicated to genomic research. He is also the founder and CEO of Synthetic Genomics, Inc., as well as the author of A Life Decoded. He is the recipient of numerous awards and honorary degrees, including the 2008 United States National Medal of Science, and twice been named one Time's 100 most influential people.