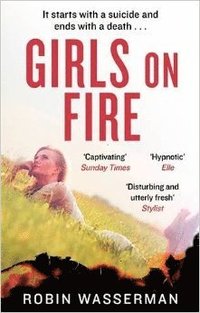 av Robin Wasserman
Häftad Engelska, 2017-01-05
139
Köp
Spara som favorit
Finns även som
Visa alla 2 format & utgåvor
'Captivating' Sunday Times 'Will utterly terrify you - in the best way possible' Buzzfeed 'While it is a mystery, the true strength of the novel comes from the honesty of the girls' portrayal' Guardian 'A hypnotic debut' Elle 'We couldn't put this one down' Marie Claire This is not a story of bad things happening to bad girls. I say this because I know you, Dex, and I know how you think. I'm going to tell you a story, and this time, it will be the truth. Hannah Dexter is a nobody, ridiculed and isolated at school by golden girl Nikki Drummond. But in their junior year of high school, Nikki's boyfriend walks into the woods and shoots himself. In the wake of the suicide, Hannah befriends new girl Lacey and soon the pair are inseparable, bonded by their shared hatred of Nikki. Lacey transforms good girl Hannah into Dex who is up for any challenge Lacey throws at her. The two girls bring their combined wills to bear on the community in which they live and think they are invulnerable. But Lacey has a secret, about life before her better half, and it's a secret that will change everything . . .
Visa hela texten

Like lightning in a bottle, Robin Wasserman's Girls on Fire captures girlhood friendship in all its shattering intensity. Seldom do you find a novel that so transports you to the dark, febrile terrain of adolescence, when intimacy and connection can turn on a dime to something far more dangerous. A captivating, terrifying novel, and one you won't forget * Megan Abbott * Flicking between points of view, Wasserman is even in her storytelling, sustaining her narrative by slowly revealing the dangerous secrets Lacey is keeping. Wasserman writes with immense energy. As a portrait of a coming-of-age, obsessive female friendship, the novel is captivating * Sunday Times * Convincing and harrowing . . . vividly detailed * Daily Mail * The tumultuous emotional extremes of adolescence are vividly conjured up in this brooding tale . . . This creepy tale is powerful and haunting * Sunday Mirror * This is a white-hot but pitch-black tale of adolescent friendship...Wasserman chillingly reveals how the intense emotions of teenage years can go to the bad * Sunday Express * Robin Wasserman's novel Girls on Fire will utterly terrify you - in the best way possible.... A dark, chilling story of secrets, violence, and female friendship, Girls on Fire will burn in the mind long after you finish reading * Buzzfeed * A suicide brings naive Hannah together with the town's bad girl, Lacey, who has a secret that will change everything. We couldn't put this one down * Marie Claire * A hypnotic debut about an intense, obsessive friendship that leaves chaos in its wake * Elle * Mean Girls plus We Need to Talk About Kevin plus Heathers equals Girls on Fire. One of those books that make you glad you're not a teen anymore . . . Tragedy ensues in this pressure cooker of a novel' * Glamour * Robin Wasserman's debut fizzes with energy * Good Housekeeping * Wasserman has an affinity for the female rebel, a talent for combining storytelling that has a confessional feel with a plot full of thrills and chills * Daily Telegraph * Female friendship, adolescent or otherwise, has always been fertile ground for fiction. The intensity. The jealousy. The passion. The mirroring. The neediness. All these and more are present in YA author Robin Wasserman's"adult" (Old Adult?) debut, Girls on Fire. Hannah Dexter is the uncool girl at school, mocked and isolated by queen bee Nikki Drummond. Until life takes a bleakly unexpected turn for Nikki, and Hannah finds herself befriended by new girl Lacey Champlain. On the surface they have nothing in common - except a burning urge for revenge. Set in a 1990s besotted with Kurt Cobain, River Phoenix and Doc Martens, Girls on Fire puts Wasserman on course to join Megan Abbott and Louise O'Neill in proving the distinction between YA and OA is utterly spurious * The Pool, Bedtime Bookclub * A deep, dark vision of the dangers of girlhood emerges from this captivating novel. Life changes for unpopular Hannah Dexter when she makes friend with new girl Lacey who rebrands her as Dex and teaches her to wear Docs and like Kurt Cobain. Everything is on the up but not for long... * Stylist.co.uk * Electrifying story about two teenage girls and a mystery suicide * Heat, Our Top Five Reads * One of the most gripping reads of the year. Heady, atmospheric and thrilling, you'll be turning the pages long after you'd planned on putting the book down. And it is well worth staying up for * Irish News * Wasserman has created a modern fable about female adolescence gone horribly wrong. An unsettling cautionary tale of friendships aligned and realigned, alliances made and broken, lives beginning and ruined, this is one of the most gripping reads of the year * Glasgow Herald * Part murder mystery, part love story, this page-turner explores the dark side of the all-consuming friendship between a wide-eyed good girl and a grunge-worshipping rebel * Cosmopolitan * This is one of the most gripping reads of the year...perfect for thriller seekers * Belfast

Robin Wasserman is a Harvard graduate and former book editor, and has published or has pieces forthcoming in the LA Review of Books, Tin House, and The New York Times. She has also written YA novels with over half a million copies in print. Girls on Fire is her first novel for adults.