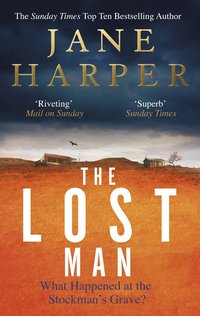 av Jane Harper
(2 röster)  |  Läs 1 recension
Häftad Engelska, 2019-05-16
95
Köp
Spara som favorit
Jane Harper's new novel, The Survivors, now available for pre-order A best crime fiction book of 2019 pick in The Times A thriller of the year 2019 pick in the Observer A bestselling Richard & Judy book club pick 2019 by the author of The Dry WHY DID CAMERON BRIGHT DIE? He had started to remove his clothes as logic had deserted him, and his skin was cracked. Whatever had been going through Cameron's mind when he was alive, he didn't look peaceful in death. Two brothers meet at the remote border of their vast cattle properties under the unrelenting sun of the outback. In an isolated part of Australia, they are each other's nearest neighbour, their homes hours apart. They are at the stockman's grave, a landmark so old that no one can remember who is buried there. But today, the scant shadow it casts was the last hope for their middle brother, Cameron. The Bright family's quiet existence is thrown into grief and anguish. Something had been troubling Cameron. Did he choose to walk to his death? Because if he didn't, the isolation of the outback leaves few suspects... PRAISE FOR THE LOST MAN 'Harper secures her place as queen of outback noir with this haunting family mystery' Sunday Times 'Her best book yet' Evening Standard 'A riveting, deeply atmospheric read' Mail on Sunday 'Harper's intricate, beautifully woven mystery...sucks you into a world where nothing is ever what it seems and everyone has secrets . . . Told with mesmerising skill' Daily Mail
Visa hela texten

Harper's gripping third novel...is her most accomplished yet: a moving story of loneliness, grief and redemption * The Times, Best Crime Fiction Books of 2019 * Harper secures her place as queen of outback noir with this haunting family mystery * Sunday Times Crime Club, star pick * Like its precursors, The Dry and Force of Nature, The Lost Man is a gripping mystery that drips with atmosphere (and sweat). This time, though, Harper has added an emotional heft that is deeply moving. It is her best book yet * Evening Standard * Jane Harper writes beautifully and compellingly about the Australian Outback. Superb * Evening Standard * In just a couple of years, Jane Harper has soared into the first rank of contemporary crime writers. The Lost Man... returns to the parched landscape she used to such powerful effect in her debut, The Dry... Three generations of women - the dead man's mother, wife and daughters - struggle to come to terms with terrible events, and the family's shocking history holds the key to this superb murder mystery * Sunday Times * I read Jane Harper's The Lost Man in February, the height of Australia's summer but the depths of the English winter. The image at the heart of the novel, of a man who has perished in the punishing heat of Australia's outback, has stayed with me ever since. Just as good - perhaps even better - than Harper's excellent thrillers The Dry and Force of Nature -- Alison Flood * Observer (Thrillers of the Year 2019) * A riveting, deeply atmospheric read * Mail on Sunday * Another splendid slice of outback noir...Fabulously atmospheric, the book starts slowly and gradually picks up pace towards a jaw-dropping denouement * Guardian, Best Recent Crime and Thrillers * Harper's debut, The Dry, centred on the horrific murder of a family in a hot, remote Australian town. Her follow-up, Force of Nature, moved the setting to the bushland, where a woman goes missing on a corporate retreat. The landscape of The Lost Man is even more hostile, even more alien and beautiful, as Harper deftly manipulates her small but fully realised cast to a conclusion * The Observer * One of the best written and most accessible novels of its kind in years . . . utterly absorbing * Richard Madeley * A third superb novel from the author of bestseller The Dry . . . Harper's intricate, beautifully woven mystery...sucks you into a world where nothing is ever what it seems and everyone has secrets . . . Told with mesmerising skill, it is a compelling portrait of isolation and the strain it exerts on even the strongest character. A little masterpiece * Daily Mail * Harper's writing creates a vivid sense of place . . . She tells a disturbing tale, not just of death but also of domestic violence, sexual abuse, hidden secrets and shattered families * Daily Express * Jane Harper certainly nails the Australian Outback - you can feel the heat come off the page in waves . . . Harper's crisp, evocative writing expertly reveals the secrets that have been festering too long in the scorching Australian sun * Metro * The very definition of a slow burn, this is much like the land in which it is set - spartan, atmospheric, and really quite beautiful * Heat Magazine, Read of the Week * Harper's first novel, The Dry, won many awards, but this one is even better. Her depiction of the extraordinary landscape is superb, as is her account of the psychological and emotional burdens it imposes on the people who try to make a living within it * Literary Review * Having read Jane's other books I was expecting great things from this - nice to be proved right...Jane writes so convincingly about the oppressive heat of the outback that you feel you're there * Woman's Way * I read it in 24 hours. It's gripping, atmospheric and ultimately deeply satisfying * Val McDermid * I absolutely loved The Lost Man. I devoured it in a day. Her best yet! * Liane Moriarty * I don't have words for how much I loved it. Her other two books were amazing, but this is in a diff

Jane Harper is the author of the international bestsellers The Dry, Force of Nature and The Lost Man. Her books are published in more than forty territories worldwide, and The Dry has been released as a major film in Australia starring Eric Bana. Jane has won numerous top awards including the CWA Gold Dagger Award for Best Crime Novel, the British Book Awards Crime and Thriller Book of the Year, the Australian Book Industry Awards Book of the Year and the Australian Indie Awards Book of the Year. Jane worked as a print journalist for thirteen years both in Australia and the UK and now lives in Melbourne.