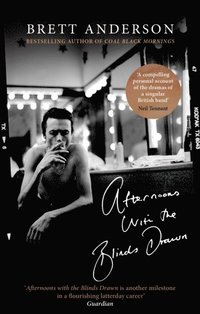 Afternoons with the Blinds Drawn

av Brett Anderson
Häftad Engelska, 2020-11-05
119
Köp
Spara som favorit
Finns även som
Visa alla 2 format & utgåvor
'A compelling personal account of the dramas of a singular British band' Neil Tennant The trajectory of Suede - hailed in infancy as both 'The Best New Band in Britain' and 'effete southern wankers' - is recalled with moving candour by its frontman Brett Anderson, whose vivid memoir swings seamlessly between the tender, witty, turbulent, euphoric and bittersweet. Suede began by treading the familiar jobbing route of London's emerging new 1990s indie bands - gigs at ULU, the Camden Powerhaus and the Old Trout in Windsor - and the dispiriting experience of playing a set to an audience of one. But in these halcyon days, their potential was undeniable. Anderson's creative partnership with guitarist Bernard Butler exposed a unique and brilliant hybrid of lyric and sound; together they were a luminescent team - burning brightly and creating some of the era's most revered songs and albums. In Afternoons with the Blinds drawn, Anderson unflinchingly explores his relationship with addiction, heartfelt in the regret that early musical bonds were severed, and clear-eyed on his youthful persona. 'As a young man . . . I oscillated between morbid self-reflection and vainglorious narcissism' he writes. His honesty, sharply self-aware and articulate, makes this a compelling autobiography, and a brilliant insight into one of the most significant bands of the last quarter century.
Visa hela texten

Anderson writes with a combination of guarded introspection and detachment . . . he conjures a cracked and confused persona, fumbling his way through a bizarre early adulthood, by turns gleefully hedonistic and wantonly self-destructive, hardworking and profligate, egotistical and insecure, a character more likely to be seen shuffling around in a dressing-grown smoking fags and staring out the window than prancing on the stage . . . Afternoons With the Blinds Drawn is another milestone in a flourishing latterday career * Guardian * A compelling personal account of the dramas of a singular British band -- Neil Tennant True to his word, this is another music book that steers away from the expected . . . it has a brazen confidence and it's rarely dull. As such, Afternoons With the Blinds Down is a worthy successor to Coal Black Mornings -- Ed Potton * The Times * Honest and lyrical . . . Anderson, in his lyrics, has always been fantastic at capturing the sleaze of underground city living and he does the same here . . . Anderson's writing is as he is in real life: sharp, unsparing and sensitive -- Miranda Sawyer * Observer * You're unlikely to read another music autobiography quite as honestly reflective as this one * Sunday Express * Thanks to his thoughtful analysis of those wild times, Afternoons with the Blinds Drawn lets in a lot of light -- Victoria Segal * Sunday Times * A refreshing corrective to the Britpop narrative . . . Reading it is a bit like being inside a Suede song itself. Which is maybe a mark of the strength of Anderson's vision . . . The pages reek of stale cigarette ash, rising damp and mouldy grouting . . . the book offers the singer's own nuanced take on pop and success * Herald * The story of Suede's rise and fall, the drugs and the feuds with other bands isn't pretty, but Anderson is on typically sharp form as he tells it * Telegraph * Anderson stopped his enchanting first memoir, Coal Black Mornings, just short of the band's brilliant early 1990s breakthrough. Here, he handles their operatic rise and fall with the same thoughtful grace, picking through the paraphernalia of addiction, fame and ego with self-lacerating honesty and a lyrical eye for time and place * Sunday Times * Poetic atmosphere (and good writing) are favoured over dirty detail * The Times * Anderson maintains dignity with thoughtful prose and doesn't drop names, but after his childhood recollections in last year's Coal Black Mornings, this is the period that will fascinate fans the most * Evening Standard *