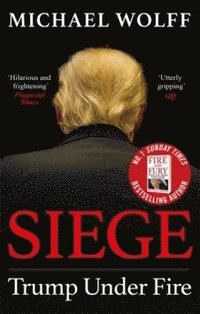 av Rupert Thomson
Häftad Engelska, 2020-09-03
119
Köp
Spara som favorit
Skickas inom 7-10 vardagar.
Gratis frakt inom Sverige över 159 kr för privatpersoner.
Michael Wolff, author of the bombshell bestseller Fire and Fury, once again takes us inside the Trump presidency to reveal a White House under siege. Just one year into Donald Trump's term as president, Michael Wolff told the electrifying story of a White House consumed by controversy, chaos and intense rivalries. Fire and Fury, an instant sensation, defined the first phase of the Trump administration; now, in Siege, Wolff has written an equally essential and explosive book about a presidency that is under fire from almost every side. At the outset of Trump's second year as president, his situation is profoundly different. No longer tempered by experienced advisers, he is more impulsive and volatile than ever. But the wheels of justice are inexorably turning: Robert Mueller's 'witch hunt' haunts Trump every day, and other federal prosecutors are taking a deep dive into his business affairs. Many in the political establishment - even some members of his own administration - have turned on him and are dedicated to bringing him down. The Democrats see victory at the polls, and perhaps impeachment, in front of them. Trump, meanwhile, is certain he is invincible, making him all the more exposed and vulnerable. Week by week, as Trump becomes increasingly erratic, the question that lies at the heart of his tenure becomes ever more urgent: Will this most abnormal of presidencies at last reach the breaking point and implode? Both a riveting narrative and a brilliant front-lines report, Siege provides an alarming and indelible portrait of a president like no other. Surrounded by enemies and blind to his peril, Trump is a raging, self-destructive inferno ? and the most divisive leader in American history.
Visa hela texten

Michael Wolff's new book, Siege, is a deliciously catty look inside the White House, full of wicked anecdotes and gossipy gold. It's like sitting in a hairdresser's listening to a fabulously indiscreet conversation beside you. It's The Kardashians: White House edition -- Harriet Alexander * Telegraph * A mordant, readable tell-all designed to show how Trump, simply by being Trump, has made himself the perfect wrecking ball, blasting holes through an array of institutions -- Jennifer Szalai * New York Times * Michael Wolff is back and not with a whimper. The latest instalment of his Trump chronicles picks up where Fire and Fury ended -- Lloyd Green * Guardian * Bannon's frequently shrewd observations make it clear why Wolff finds him irresistible. The author is mostly interested in Trump's psychology. He is adept at documenting the president's lunacy, and Bannon is frequently an able fellow shrink * Washington Post * This book confirms that Trump should never have been allowed to hold power in the first place -- Max Liu * The i * Once again, the dirt is abundant. Donald Trump insults everyone in his orbit, repeatedly, viciously, and - always privately - they return the favor ... Siege is overflowing with such titillating material, which is sure to make it another tour de force for the Trump resistance * Vanity Fair * Utterly gripping * GQ * Rich in psychological insights -- Peter Conrad * Observer * Michael Wolff has unearthed a mass of damning material about Donald Trump . . . Siege is filled with delicious gossip -- Sarah Baxter * Sunday Times * Readers are rewarded with more eye-popping examples of [Trump's] crudeness and vulgarity * Daily Mail * Hilarious and frightening, and often reads like a Hollywood gossip column * Financial Times * In Fire and Fury Michael Wolff wrote an extraordinarily gossipy account of President Trump's first year in the White House. Siege covers year two of presidential dysfunction and it's just as alarming, weird, toe-curling and funny -- Books of the Year * The Times *

Michael Wolff is the author of Fire and Fury, the number-one bestseller that for the first time told the inside story of the Trump White House. He has received numerous awards for his work, including two National Magazine Awards. The author of seven previous books, he has been a regular columnist for Vanity Fair, New York, the Hollywood Reporter, British GQ and other magazines and newspapers. He lives in Manhattan and has four children.