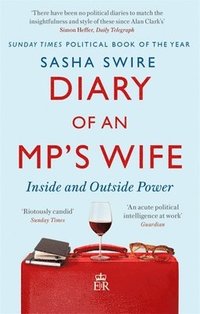 Diary of an MP's Wife

Inside and Outside Power: 'riotously candid' Sunday Times

av Sasha Swire
Häftad Engelska, 2021-07-01
132
Köp
Spara som favorit
Kan tyvärr inte längre levereras innan julafton.
Finns även som
Visa alla 3 format & utgåvor
Sunday Times Political Book of the Year A Book of the Year in the New Statesman, Financial Times, Telegraph, Guardian, Mail on Sunday and The Times 'They're the wickedest political diaries since Alan Clark's' Daily Mail 'Riotously candid' Decca Aitkenhead, Sunday Times What is it like to be a wife of a politician in modern-day Britain? Sasha Swire finally lifts the lid. For more than twenty years she has kept a secret diary detailing the trials and tribulations of being a political plus-one, and gives us a ringside seat at the seismic political events of the last decade. A professional partner and loyal spouse, Swire has strong political opinions herself - sometimes more 'No, Minister' than 'Yes'. She detonates the stereotype of the dutiful wife. From shenanigans in Budleigh Salterton to state banquets at Buckingham Palace, gun-toting terrorist busters in pizza restaurants to dinners in Downing Street sitting next to Boris Johnson, Devon hedges to partying with City hedgies, she observes the great and the not-so-great at the closest of quarters. The results are painfully revealing and often hilariously funny. Here are the friendships and the fall-outs, the general elections and the leadership contests, the scandals and the rivalries. Swire showed up, shored up and rarely shut up. She also wrote it all down. Diary of an MP's Wife is a searingly honest, wildly indiscreet and often uproarious account of what life is like in the thick of it.
Visa hela texten

Gloriously indiscreet * Daily Mail * A gossipy, amusing, opinionated account of what it's like to be married to an MP . . . Good fun and eye-opening * The Times * Riotously candid -- Decca Aitkenhead * Sunday Times * A glorious, compelling, jaw-dropping read * Evening Standard * Ten years ago, reviewing Alastair Campbell's diaries for the Spectator, I concluded as follows: "Who will be the chroniclers of the Cameron government? Somewhere, unknown to his or her colleagues, a secret scribbler will already be at work, documenting the rise and, in due course, no doubt, the fall of this administration" Well, here it is. The diary covers not only the rise and fall of the Cameroons, but also the shenanigans surrounding Brexit and the inexorable rise of Boris, concluding at the end of last year when Sir Hugo (as he was by then) left parliament.No holds are barred. Sasha is candid, irreverent, occasionally outrageous and sometimes hilarious -- Chris Mullin * Spectator * They're the wickedest political diaries since Alan Clark's * Daily Mail * Imagine the Alan Clark diaries, but written by his wife Jane instead: all the high-octane political gossip, set against a backdrop of country house shooting weekends and boozy dinners at Chequers, but seen through the sceptical eyes of a woman one step removed from all the head-butting stags. But there's far more to this book than reheated pillow talk. There is an acute political intelligence at work, of the sort that makes one wonder what might have been had Swire not settled for experiencing politics vicariously through her husband -- Gaby Hinsliff * Guardian * Westminster diaries are judged on three levels: the details they leak, the political era they re-create and the central character of the author. Swire scores highly on all three. She is funnier and ballsier than Chris Mullin and if she falls short of Alan Clark it is only because he was so devilish -- Quentin Letts * The Times * It would be a mistake to dismiss these diaries as just another exercise in score-settling in the freak show called Westminster, enabling the British public to engage in one of its favourite pastimes, namely loathing and belittling the political class. Lady Swire, wife of Sir Hugo Swire, former MP for East Devon and from 2010 to 2016 a Minister of State in the Northern Ireland Office and Foreign Office, is a cut above that. She actually has literary ability, a quality that manifests itself in the colour with which she describes the show and the freaks within it . . . there have been no political diaries to match the insightfulness and style of these since Alan Clark's and, like his, they will become an essential point of reference for those who wish to understand the politics of the age they describe -- Simon Heffer * Telegraph * Swire's uncharitable musings have demonstrated that the disloyalist's diary still has the power to inflict acute embarrassment, long after the events -- Ben MacIntyre * The Times * As tell-all diaries go, they don't get more riveting than Lady Swire's juicy tales -- Alice Fuller * Sun * Diary of an MP's Wife [is] both compelling and shrewd. The pesky MP's wife may have a better sense of public taste than all the players strutting on the political stage. I can't wait for the next swathe of Swire diaries and the film rights for these ones -- Sarah Sands * Oldie * Smirking at the juiciest revelations in the publishing sensation of the year. Relish these stories for they may be the last laughs we get in a while * Scotsman * This gossipy, opinionated and frequently hilarious book could be the most entertaining political diary since Alan Clark's -- Charlotte Heathcote * Sunday Express * Lady Swire has a keen eye for detail and a waspish turn of phrase, which makes this a real page-turner. Lady Swire deservedly takes her place alongside Alan Clark, Chips Channon and Julian Critchley' -- Lord Vaizey of Didcot Right now, I'm reading a gossipy book; it's a diary of a British MP's wife, Sas

Sasha Swire was raised and educated in west Cornwall, where her father, Sir John Nott, was MP for the St Ives constituency. She was a journalist on national and regional publications and in Asia before working as her husband Hugo Swire's political researcher from 2001 to 2019. She divides her time between Devon and London.