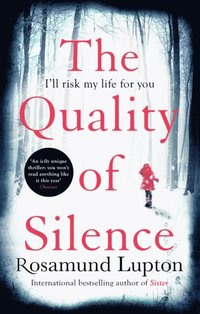 The Richard and Judy and Sunday Times bestseller

av Rosamund Lupton
E-bok (EPUB - DRM), Engelska, 2015-07-02
Den här boken kan endast laddas ned av privatpersoner.
46
Den här boken kan endast laddas ned av privatpersoner.
Ladda ned
Spara som favorit
Laddas ned direkt
Läs i vår app för iPhone, iPad och Android
Finns även som
Visa alla 1 format & utgåvor
Sunday Times Top-Ten Bestseller and Richard and Judy Book Club Choice.'An elegant and icily unique thriller: you won't read anything like it this year' Observer'Scary, suspenseful and so exquisitely, evocatively written. Everything you want in a wonderful novel' Liane MoriartyI'll risk my life for you.On 24 November Yasmin and her ten-year-old daughter Ruby set off on a journey across Northern Alaska. They're searching for Ruby's father, missing in the arctic wilderness.More isolated with each frozen mile they cover, they travel deeper into an endless night. And Ruby, deaf since birth, must brave the darkness where sight cannot guide her.She won't abandon her father. But winter has tightened its grip, and there is somebody out there who wants to stop them.Somebody tracking them through the dark.Praise for The Quality of Silence:'There are many things to love about Lupton's third novel, not least its stunning evocation of the stark, beautiful Alaskan wilds. An elegant and icily unique thriller: you won't read anything like it this year' Observer'Scary, suspenseful and so exquisitely, evocatively written. I found myself shivering as if I were there in Alaska with Ruby and her mother. Everything you want in a wonderful novel' Liane Moriarty, author of The Husband's Secret'Ambitious and imaginative. Narrated in part by Ruby (her deafness is treated with great sensitivity), the landscape, wildlife and bitter climate of Alaska are powerfully drawn. Chilling in every sense, you won't want to step away from this story' Sunday Mirror'A sophisticated thriller which brilliantly evokes the sublime and terrifying landscape of Alaska, the culture of the Inupiat people and the fragility of our planet' Sunday Telegraph'Like a breath of icy air, this relentlessly tense thriller is also a child's-eye family drama like none other. Not since Miss Smilla's Feeling for Snow have I shivered like this' Emma Donoghue, author of Room'Will have you gripped form start to finish' Cosmopolitan'A taut psychological thriller, The Quality of Silence will have your heart thumping. Masterful pacing, riveting plotting. Absolutely gripping' Louise Penny'A literary slow burn, whose focus is as much on human endurance and a mother's relationship with her deaf daughter as the mystery of her husband's disappearance. This is Lupton at the height of her storytelling powers' Daily Mail'An eerie eco-tale of disasters both real and man-made on the frozen tundra of Alaska. Yasmin and her daughter embark on what becomes an epic journey into the wilderness, [and] the alternating voices of mother and daughter are so compelling, it's hard not to want to go along for the ride. The temperature drops, the action heats up and the suspense builds with the storm. Even a white-out can't hide the darkness within' Vanessa Friedman, NY Times'A beautifully written thriller, and the way in which Lupton used the tundra as a metaphor for grief and faith in stunning. The voice of Ruby and her compassionate exploration of a life without sound only adds to the richness of the book' Press and Journal'A wonderful writer . . . absolutely gripping' Jane Garvey, BBC Radio 2 Women's Hour'The pressure is on to keep creating equally brilliant stores [and] Lupton has done that with The Quality of Silence' Red Magazine'An elegant, chilling read from a writer who continues to stretch the bounds of suspense' William Landay, author of Defending Jacob
Visa hela texten