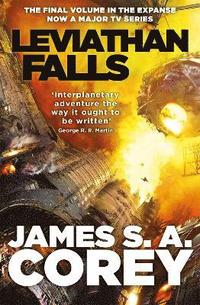 Book 9 of the Expanse (now a Prime Original series)

av James S A Corey
Inbunden Engelska, 2022-03-02
229
Köp
Spara som favorit
Finns även som
Visa alla 2 format & utgåvor
The biggest SF series of the decade comes to an incredible conclusion in the ninth and final novel in James S. A. Corey's Hugo Award-winning Expanse series. NOW A MAJOR TV SERIES FROM AMAZON PRIME HUGO AWARD WINNER FOR BEST SERIES 'Interplanetary adventure the way it ought to be written' George R. R. Martin The Laconian Empire has fallen, setting the thirteen hundred solar systems free from the rule of Winston Duarte. But the ancient enemy that killed the gate builders is awake, and the war against our universe has begun again. In the dead system of Adro, Elvi Okoye leads a desperate scientific mission to understand what the gate builders were and what destroyed them, even if it means compromising herself and the half-alien children who bear the weight of her investigation. Through the wide-flung systems of humanity, Colonel Aliana Tanaka hunts for Duarte's missing daughter. . . and the shattered emperor himself. And on the Rocinante, James Holden and his crew struggle to build a future for humanity out of the shards and ruins of all that has come before. As nearly unimaginable forces prepare to annihilate all human life, Holden and a group of unlikely allies discover a last, desperate chance to unite all of humanity, with the promise of a vast galactic civilization free from wars, factions, lies, and secrets if they win. But the price of victory may be worse than the cost of defeat. 'A thrill ride of a tale . . . This is a deeply satisfying and fitting conclusion to one of the best space opera series in many years' Booklist (starred review) The Expanse series: Leviathan Wakes Caliban's War Abaddon's Gate Cibola Burn Nemesis Games Babylon's Ashes Persepolis Rising Tiamat's Wrath Leviathan Falls Praise for the Expanse: 'The science fictional equivalent of A Song of Ice and Fire' NPR Books 'As close as you'll get to a Hollywood blockbuster in book form' io9.com 'Great characters, excellent dialogue, memorable fights' wired.com 'High adventure equalling the best space opera has to offer, cutting-edge technology and a group of unforgettable characters . . . Perhaps one of the best tales the genre has yet to produce' Library Journal 'This is the future the way it's supposed to be' Wall Street Journal 'Tense and thrilling' SciFiNow
Visa hela texten

The final instalment of Corey's Expanse series is its strongest yet. It's a thrill ride of a tale, boasting the same kinetic momentum of the first book, with the highest possible stakes and profound emotional resonance. The story is masterfully paced and structured, filled to bursting with some of the genre's best world building . . . This is a deeply satisfying and fitting conclusion to one of the best space opera series in many years * BOOKLIST (starred review) * Daniel Abraham and Ty Franck, writing as Corey, stick the landing in their spectacular ninth and final Expanse space opera (after Tiamat's Wrath), set in a future where humanity has begun to expand beyond the solar system . . . This fully satisfying resolution renders the entire series an all-time genre classic * PUBLISHERS WEEKLY (starred review) * Interplanetary adventure the way it ought to be written * George R. R. Martin on Leviathan Wakes * As close as you'll get to a Hollywood blockbuster in book form * io9.com on Leviathan Wakes * This is the future the way it was supposed to be * Wall Street Journal on Leviathan Wakes * Tense and thrilling * SciFiNow on Leviathan Wakes *

James S. A. Corey is the pen name of Daniel Abraham and Ty Franck. In addition to writing the novels and short stories of The Expanse, they wrote and produced the television series of the same name. Daniel lives with his family in the American southwest. Ty will tell you where he lives when and if he wants you to come over.