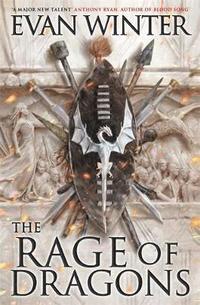 The Rage of Dragons

The Burning, Book One

av Evan Winter
Inbunden Engelska, 2019-07-18
149
Köp
Spara som favorit
Skickas inom 5-8 vardagar.
Fri frakt inom Sverige för privatpersoner.
Finns även som
Visa alla 2 format & utgåvor
'A captivating epic fantasy from a major new talent' Anthony Ryan, author of Blood Song 'Intense, inventive and action-packed from beginning to end - a relentlessly gripping, brilliant read' James Islington, author of The Shadow of What Was Lost The Omehi people have been fighting an unwinnable war for generations. The lucky ones are born gifted: some have the power to call down dragons, others can be magically transformed into bigger, stronger, faster killing machines. Everyone else is fodder, destined to fight and die in the endless war. Tau Tafari wants more than this, but his plans of escape are destroyed when those closest to him are brutally murdered. With too few gifted left the Omehi are facing genocide, but Tau cares only for revenge. Following an unthinkable path, he will strive to become the greatest swordsman to ever live, willing to die a hundred thousand times for the chance to kill three of his own people. THE RAGE OF DRAGONS LAUNCHES AN UNMISSABLE EPIC FANTASY SERIES ABOUT A WORLD CAUGHT IN AN ENDLESS WAR AND THE YOUNG MAN WHO WILL BECOME HIS PEOPLE'S ONLY HOPE FOR SURVIVAL 'Utter and complete perfection. Winter has created an absolute masterpiece of a novel' The Bookbag 'Intense, vivid and brilliantly realized - a necessary read' Anna Smith Spark, author of The Court of Broken Knives 'Stunning debut fantasy' Publishers Weekly 'Fans of Anthony Ryan's Blood Song will love this' Django Wexler, author of The Thousand Names 'A Xhosa-inspired world complete with magic, dragons, demons and curses, The Rage of Dragons takes classic fantasy and imbues it with a fresh and exciting twist' Anna Stephens, author of Godblind 'A gripping tale . . . with one of the most enthralling hero's journeys I've read' S. A. Chakraborty, author of City of Brass
Visa hela texten

Evan Winter lures you into his world with blazing action then weaves compelling characters and emotional angst into a captivating world. It's a most welcome addition to the epic hero's journey . . . This is hands down one of my favorite books of the year -- FIYAH The Rage of Dragons explodes at a breakneck pace. Complex characters, dragons, revenge . . . I adored everything about this book! . . . What a brilliant debut! -- FANTASY BOOK REVIEW A fierce revenge story set in a distinctive world . . . A sequel's a must. Meanwhile can Hollywood option this? It'd make a Gladiator-like film we'd gladly queue up for -- SFX Distinguishes itself by its setting, a fantasy world inspired by Africa, but truly impresses with its storytelling . . . an impressive fantasy debut -- B&N SCI-FI AND FANTASY BLOG The Rage of Dragons is an excellent high-octane thrill ride of a fantasy debut that I devoured in one day. Highly recommended -- GRIMDARK MAGAZINE A powerful tale . . . Winter's debut will draw strong comparisons to George R. R. Martin and Brandon Sanderson, and the strong African influences and ties create a singular, exciting epic with intriguing characters and culture. Readers will be clamoring for the next installment -- LIBRARY JOURNAL Utter and complete perfection. Winter has created an absolute masterpiece of a novel . . . rich and powerful, with complex characters and an intricate plot and battle scenes that will blow your mind -- THE BOOKBAG Wow. This book hits the ground with stunning action and danger and it barely lets up as the pages fly by. I loved the African-influenced culture, the unique use of dragons and demons, the complex martial and class hierarchy, and it has a magic system unlike anything I've seen before. What a terrific set up for a series! -- David Anthony Durham, author of The Acacia Trilogy The Rage of Dragons is an uncompromisingly brutal fantasy in a unique, fascinating world . . . Fans of Anthony Ryan's Blood Song will love this -- Django Wexler, author of THE THOUSAND NAMES Fast-paced, incredibly engaging, and brimming with tension . . . Evan Winter is another new fantasy voice to watch out for; his voice deserves to be heard and his book deserves to be read . . . The Rage of Dragons is a breathtaking fantasy debut -- NOVEL NOTIONS A Xhosa-inspired world complete with magic, dragons, demons and curses, The Rage of Dragons takes classic fantasy and imbues it with a fresh and exciting twist -- Anna Stephens, author of GODBLIND Compelling, expansive and rich. Winter has created an exciting and immersive world of magic, vengeance and wonder -- Micah Yongo, author of LOST GODS Intense, vivid and brilliantly realized - a necessary read -- Anna Smith Spark, author of THE COURT OF BROKEN KNIVES A refreshingly brutal and imaginative tale of survival and revenge. Evan Winter's battles are visceral, bloody masterpieces, and Tau's climb from exiled Lesser to Igonyama is earned in a way few writers could ever match -- David Dalglish, author of A DANCE OF CLOAKS The Rage of Dragons takes the best parts of epic fantasy and sets them in a refreshing and inventive new world, a gripping tale that makes clear the true cost of war and colonialism with one of the most enthralling hero's journeys I've read -- S. A. Chakraborty, author of CITY OF BRASS People ask the last book I couldn't put down, and I tell them The Rage of Dragons. The tension rises with every page until you fear it will break you in two -- Peter V. Brett, bestselling author of THE PAINTED MAN A thrilling, explosive read -- STARBURST Winter's stunning debut fantasy epic is rich in complex characters and a well-wrought world with both European and African influences . . . This impressive series launch holds tremendous promise -- PUBLISHERS WEEKLY Intense, inventive and action-packed from beginning to end - a relentlessly gripping, brilliant read -- James Islington, author of THE SHADOW OF WHAT WAS LOST The stultifying and dehumanising effects of a caste-base

Bloggat om The Rage of Dragons