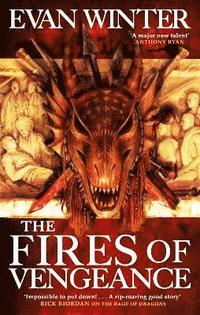 The Fires of Vengeance

av Evan Winter
Häftad Engelska, 2021-06-24
113
Köp
Spara som favorit
Finns även som
Visa alla 3 format & utgåvor
'CAPTIVATING EPIC FANTASY FROM A MAJOR NEW TALENT' Anthony Ryan on The Rage of Dragons Desperate to delay an impending attack by the indigenous people of Xidda, Tau and his queen craft a dangerous plan. If Tau succeeds, the queen will have the time she needs to assemble her forces and launch an all-out assault on her own capital city, where her sister is being propped up as the 'true' Queen of the Omehi. If the city can be taken, if Tsiora can reclaim her throne and reunite her people, then the Omehi might have a chance to survive the coming onslaught. THE FIRES OF VENGEANCE CONTINUES THE UNMISSABLE EPIC FANTASY SERIES THAT BEGAN WITH EVAN WINTER'S ACCLAIMED DEBUT THE RAGE OF DRAGONS. Praise for The Rage of Dragons: 'Intense, inventive and action-packed from beginning to end - a relentlessly gripping, brilliant read' James Islington, author of The Shadow of What Was Lost 'Stunning debut fantasy' Publishers Weekly 'Intense, vivid and brilliantly realised - a necessary read' Anna Smith Spark, author of The Court of Broken Knives 'Impossible to put down' Rick Riordan 'Fans of Anthony Ryan's Blood Song will love this' Django Wexler, author of The Thousand Names 'A Xhosa-inspired world complete with magic, dragons, demons and curses, The Rage of Dragons takes classic fantasy and imbues it with a fresh and exciting twist' Anna Stephens, author of Godblind
Visa hela texten

Action-packed . . . [will] leave readers holding their breath for the next in the series -- PUBLISHERS WEEKLY (starred review) This is, without a shadow of a doubt, an exceptional sequel that succeeded over its incredible predecessor -- NOVEL NOTIONS Expertly structured with a keen eye for action and character, The Rage of Dragons is a captivating epic fantasy from a major new talent A thrilling, explosive read -- STARBURST on THE RAGE OF DRAGONS Winter's stunning debut fantasy epic is rich in complex characters and a well-wrought world with both European and African influences . . . This impressive series launch holds tremendous promise Intense, inventive and action-packed from beginning to end - a relentlessly gripping, brilliant read intense, vivid and brilliantly realized - a necessary read People ask the last book I couldn't put down, and I tell them The Rage of Dragons. The tension rises with every page until you fear it will break you in two -- Peter V. Brett on THE RAGE OF DRAGONS Without a doubt, I won't read a book as good as this one was for the rest of the year -- FanFiAddict