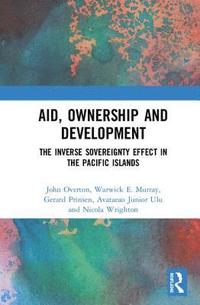 The Inverse Sovereignty Effect in the Pacific Islands

av John Overton, Warwick E Murray, Gerard Prinsen, Tagaloa Avataeao Ulu, Nicola Wrighton
Inbunden Engelska, 2018-08-14
1489
Köp
Spara som favorit
Skickas inom 7-10 vardagar.
Fri frakt inom Sverige för privatpersoner.
Finns även som
Visa alla 2 format & utgåvor
One of the key principles for effective aid programmes is that recipient agencies exert high degrees of ownership over the agendas, resources, systems and outcomes of aid activities. Sovereign recipient states should lead the process of development. Yet despite this well-recognised principle, the realities of aid delivery mean that ownership is often compromised in practice. Aid, Ownership and Development examines this 'inverse sovereignty' hypothesis with regard to the states and territories of the Pacific Island region. It provides an initial overview of different aid 'regimes' over time, maps aid flows in the region, and analyses the concept of sovereignty. Drawing on a rich range of primary research by the authors and contributors, it focuses on the agencies and individuals within the Pacific Islands who administer and apply aid projects and programmes. There is indeed evidence for the inverse sovereignty effect; particularly when island states and their small and stretched bureaucracies have to deal with complex and burdensome donor reporting requirements, management systems, consultative meetings and differing strategic priorities. This book outlines important ways in which Pacific agencies have proved adept not only at meeting these requirements, but also asserting their own priorities and ways of operating. It concludes that global agreements, such as the Paris Declaration on Aid Effectiveness in 2005 and the recently launched Sustainable Development Goals, can be effective means for Pacific agencies to both hold donors to account and also to recognise and exercise their own sovereignty.
Visa hela texten

John Overton is a geographer who has worked on development issues and the Pacific region for over thirty years. His Pacific education began with a position at the University of the South Pacific in the mid-1980s and has continued through working with many students and colleagues from the Pacific Island region. He is currently Professor of Development Studies at Victoria University of Wellington, New Zealand. Warwick E. Murray gained a PhD in geography at the University of Birmingham, UK and served as a lecturer in geography at the University of the South Pacific (1997-2000). Taking up a university role in Wellington in 2001 he has focused his research on development geographies of the Pacific Island region and Rim (including Latin America). An Editor of Asia Pacific Viewpoint since 2002, he is currently Professor of Human Geography at Victoria University of Wellington. Gerard Prinsen teaches Development Studies at Massey University New Zealand, after a professional career in development practice. Most of his research revolves around local health and education services as spaces where small, rural, or remote communities negotiate their relationships with big metropolitan powers. Avataeao Junior Ulu is an international development practitioner and has worked in the wider Pacific region since 2002. His master's degree focused on aid sovereignty in Samoa, and excerpts from his thesis can be found in this book. Junior is currently completing his PhD on migration, education and development with reference to Samoa. He also does development consultancy work in his spare time. Nicola (Nicki) Wrighton spent many years working in the Pacific Island region for aid agencies, as a consultant and for Pacific organisations, including the Government of Tuvalu. Her master's degree in 2010 on aid and Tuvalu helped shape the Marsden Fund grant that funded the research for this book. She was working on her PhD on aid and sovereignty in the Pacific at Victoria University of Wellington when illness struck and she died tragically in 2014.