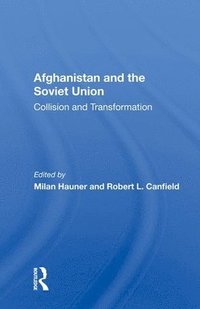 Afghanistan And The Soviet Union

av Milan Hauner, Robert L Canfield
Inbunden Engelska, 2019-08-28
1560
Köp
Spara som favorit
Finns även som
Visa alla 3 format & utgåvor
Since the dramatic events of a decade ago-the revolutions in Kabul and Teheran, the Soviet invasion of Afghanistan, and the Gulf War- "Greater Central Asia" has recaptured the imagination of academia. Historians, Islamicists, anthropologists, political scientists, and defense analysts began to convene conferences and to produce collective volumes that concentrated on two seemingly unrelated subjects: the continuity and strength of ethnocultural patterns in Muslim Central Asia, on the one hand, and the limited range of U.S. military options for defense of the oil-rich Gulf region against hypothetical Soviet invasion, on the other. The contributors to this volume were asked to focus on the long term significance of the junction between Afghanistan and Soviet Eurasia through the "Midlands" region-a relationship that could have wide implications.
Visa hela texten

MILAN HAUNER was born in Germany during World War II and educated in Prague, France and England, where he studied at St John's College, Cambridge, and St Antony's, Oxford. He has published eight books and more than one hundred scholarly articles. Among his books are India in Axis Strategy (1981) and What is Asia to us? (1990). He is currently preparing a critical edition of President Edvard Benes' war memoirs 1939-45.

Introduction -- The Human Factor -- The Collision of Evolutionary Process and Islamic Ideology in Greater Central Asia -- The Mujahedin and the Preservation of Afghan Culture -- The Sovietization of Afghanistan -- The Geopolitical Infrastructure -- Central Asia and the Soviet "Midlands": Regional Position and Economic Integration -- Afghanistan Resources and Soviet Policy in Central and South Asia -- Afghanistan and the Transport Infrastructures of Turkestan -- The Soviet Geostrategic Dilemma -- Conclusion -- Maps