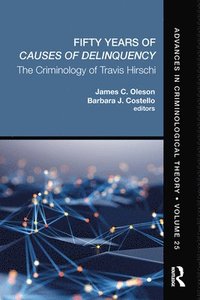 The Criminology of Travis Hirschi

av James C Oleson, Barbara J Costello
Inbunden Engelska, 2019-11-20
1649
Köp
Spara som favorit
Skickas inom 5-8 vardagar.
Fri frakt inom Sverige för privatpersoner.
Finns även som
Visa alla 2 format & utgåvor
This volume marks the 50th anniversary of the publication of Travis Hirschi's seminal work Causes of Delinquency. The influence of Hirschi's book, and the theory of social control it described, can scarcely be overstated. Social control theory has been empirically tested or commented on by hundreds of scholars and is generally regarded as one of the three dominant theories of crime. The current work highlights the impact that social control theory has had on criminological theory and research to date. Agnew's contribution highlights the role that Hirschi's tests of control versus strain theory had in contributing to the "near demise" of classic strain theories, and to the subsequent development of general strain theory. Serrano-Maillo relates control to drift, and Tedor and Hope compare the human nature assumptions of control theory to the current psychological literature. Other contributions return to Hirschi's original Richmond Youth Survey (RYS) data and demonstrate the robustness of Hirschi's major findings. Costello and Anderson find strong support for Hirschi's predictions in an analysis of a diverse group of youths in Fayetteville, Arkansas, in 1999; Nofziger similarly finds support for Hirschi's predictions with an analysis of the girls in the RYS, and explores the criticisms of social control theory that were the result of Hirschi's failure to analyze the data from the girls in the sample. Kempf-Leonard revisits her seminal 1993 survey of control theory and reviews the current empirical status of control theory. Other contributions explore new directions for both social control theory and self-control theory. The contribution by Cullen, Lee, and Butler holds that one element of the social bond, commitment, was under-theorized by Hirschi, and the authors present a more in-depth development of the concept. Quist explores the possibility of expanding social control theory to explicitly incorporate exchange theory concepts; Ueda and Tsutomi apply control theory cross-culturally to a sample of Japanese students; and Felson uses control theory to organize criminological ideas. Vazsonyi and Javakhishvili's contribution is an empirical analysis of the connections between social control in early childhood and self-control later in life; Chapple and McQuillan's contribution suggests that the gender gap in delinquency is better explained by increased controls in girls than by gendered pathways to offending. Oleson traces the evolution of Hirschi's control theory, and suggests that, given the relationships between fact and theory, a biosocial model of control might be a promising line of inquiry. Fifty Years of Causes of Delinquency: The Criminology of Travis Hirschi describes the current state of control theory and suggests its future directions, as well as demonstrates its enduring importance for criminological theory and research. The volume will be of interest to scholars working in the control theory tradition as well as those critical of the perspective, and is suitable for use in graduate courses in criminological theory.
Visa hela texten

James C. Oleson is Associate Professor of Criminology at the University of Auckland. He has a B.A. from St. Mary's College of California, an M.Phil. and a Ph.D. from Cambridge University, and a J.D. from UC Berkeley. After being selected as a 2004-2005 U.S. Supreme Court Fellow, he led the Criminal Law Policy Staff of the United States Courts until 2010. He is interested in psychological criminology, theory, risk assessment, sentencing, and penology. Barbara J. Costello (Ph.D., University of Arizona) is Professor of Sociology at the University of Rhode Island. Her research has focused on testing and extending control theories of crime and delinquency. Her recent research focuses on peer influence both toward and away from deviant behavior, with an emphasis on the mechanisms by which peers influence each other's behavior.