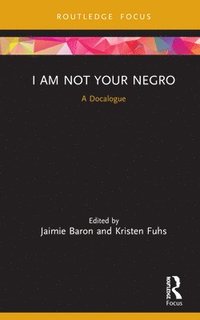 I Am Not Your Negro

av Jaimie Baron, Kristen Fuhs
Inbunden Engelska, 2020-06-18
809
Köp
Spara som favorit
Skickas inom 10-15 vardagar.
Fri frakt inom Sverige för privatpersoner.
Finns även som
Visa alla 2 format & utgåvor
As the inaugural volume in the Docalogue series, this book models a new form for the discussion of documentary film. James Baldwin's writing is intensely relevant to contemporary politics and culture, and Peck's strategies for representing him and conveying his work in I Am Not Your Negro (2016) raise important questions about how documentary can bring the work of a complex thinker like Baldwin to a broader public. By combining five distinct perspectives on a single documentary film, this book offers different critical approaches to the same media object, acting both as an intensive scholarly treatment of a film and as a guide for how to analyze, theorize, and contextualize a documentary. Undergraduate and graduate students as well as scholars of film and media studies, communication studies, African American studies, and gender and sexuality studies will find this book extremely useful in understanding the significance of this film and the ways in which it offers insight into not only Baldwin and his writings but also wider historical and contemporary realities.
Visa hela texten

Bloggat om I Am Not Your Negro

Jaimie Baron is Associate Professor of Film Studies at the University of Alberta. She is the author of The Archive Effect: Found Footage and the Audiovisual Experience of History (2014) and Reuse, Misuse, Abuse: The Ethics of Audiovisual Appropriation in the Digital Era (2020) as well as many journal articles and book chapters. She is also the founder, director, and co-curator of the Festival of (In)appropriation, a yearly international festival of short experimental found footage films and videos. Kristen Fuhs is Associate Professor of Media Studies in the Department of Communication at Woodbury University. She writes about documentary film, the American criminal justice system, and contemporary celebrity, and her work has appeared in journals such as Cultural Studies; the Historical Journal of Film, Radio, and Television; and the Journal of Sport & Social Issues.