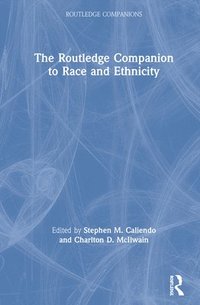 The Routledge Companion to Race and Ethnicity

av Stephen M Caliendo, Charlton D Mcilwain
Inbunden Engelska, 2020-10-28
1254
Köp
Spara som favorit
Skickas inom 10-15 vardagar.
Gratis frakt inom Sverige över 159 kr för privatpersoner.
Finns även som
Visa alla 4 format & utgåvor
The second edition of The Routledge Companion to Race and Ethnicity offers readers a broad overview of scholarly exploration of the ways that humans have organized themselves (and have been organized) according to racial and ethnic divisions. More than 80 scholars from around the world and representing multiple academic traditions contribute entries to this accessible yet sophisticated volume that addresses contemporary issues in historical context. The first half of the book challenges readers to grapple with some of the most controversial aspects of categorization, prejudice and discrimination through focused chapters ranging from the notion of Whiteness to the supposed biological rationale for racial categorization. The second half is comprised of 70 shorter entries on specialized concepts, persons and groups that are crucial to understanding these issues. Taken as a whole, this volume provides a broad, multi-disciplinary and global overview of issues that continue to provide challenges to notions of equality and justice.
Visa hela texten

"With their second edition of the Routledge Companion to Race and Ethnicity, Caliendo and McIlwain have provided students in the social sciences and humanities with added knowledge of the contemporary issues facing a range of diverse cultural groups. From politics to personalities, the content provides in-depth conversations about the basics and nuances of race and ethnicity. Most importantly, the authors give intellectual voice to subjects that are often dominated by opinion, which provokes reflection of, and rethinking about, one's personal views." - David Wilson, Ph.D., Senior Associate Dean for Arts and Sciences and Professor of Political Science, University of Delaware, US

Stephen M. Caliendo is Dean of the College of Arts and Sciences and Professor of Political Science at North Central College, where he studies political psychology and political communication, particularly as it relates to U.S. elections and race. He is the author of Teachers Matter: The Trouble with Leaving Political Education to the Coaches (2000) and Inequality in America: Race, Poverty and Fulfilling Democracy's Promise (Routledge, third edition forthcoming). He is also coauthor of Race Appeal: How Candidates Invoke Race in U.S. Political Campaigns (2011). Charlton D. McIlwain is Associate Professor of Media, Culture and Communication at New York University. His current research focuses on the use of racial appeals in political communication, including the semiotic construction of racial appeals in language and visual images; the effects of racial appeals on public opinion and voting behavior; framing and priming effects of race in various media; and media coverage of minority political candidates. He is the coauthor of Race Appeal: How Candidates Invoke Race in U.S. Political Campaigns (2011), as well as When Death Goes Pop: Death, Media and the Remaking of Community (2004), Death in Black and White: Death, Ritual and Family Ecology (2003), and Black Software: The Internet and Racial Justice, from the AfroNet to Black Lives Matter (2020).