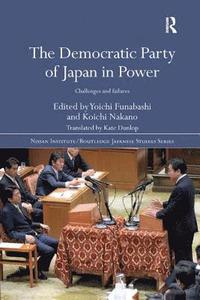 The Democratic Party of Japan in Power

av Yoichi Funabashi, Koichi Nakano
Häftad Engelska, 2019-01-03
609
Köp
Spara som favorit
Finns även som
Visa alla 3 format & utgåvor
When the Democratic Party of Japan (DPJ) came to power in September 2009, Japanese citizens expected the imminent arrival of a new political era, characterized by a two-party system. However, in addition to the triple disasters of March 2011, the DPJ faced numerous difficulties arising from its controversial policies and massive party defections following the government's consumption tax hike legislation. The DPJ fell from power following a crushing defeat in the 2012 Lower House election, in which its seat total was drastically reduced. This book examines the September 2009-December 2012 administration of the DPJ from various perspectives, including policies, party governance, management, and legacy. It identifies the significance of the DPJ to Japan's party politics, explains the reasons for its downfall, and derives crucial lessons for the future of party democracy in Japan. The contributors, a team of professional academics and a lawyer, analyse the policies and events of the DPJ administration based on their interviews with key DPJ politicians and related persons at or close to the centre of the administration. Together they elicit insights from the experiences of the DPJ government to inform the expectations of Japan's party democracy. Explaining how the failure of the DPJ government has long-term importance for understanding Japanese politics, this book will be invaluable for students and scholars of the field.
Visa hela texten