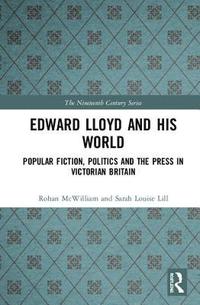 Edward Lloyd and His World

Popular Fiction, Politics and the Press in Victorian Britain

av Sarah Louise Lill, Rohan McWilliam
Inbunden Engelska, 2019-05-03
1889
Köp
Spara som favorit
Skickas inom 10-15 vardagar.
Fri frakt inom Sverige för privatpersoner.
Finns även som
Visa alla 2 format & utgåvor
The publisher Edward Lloyd (1815-1890) helped shape Victorian popular culture in ways that have left a legacy that lasts right up to today. He was a major pioneer of both popular fiction and journalism but has never received extended scholarly investigation until now. Lloyd shaped the modern popular press: Lloyd's Weekly Newspaper became the first paper to sell over a million copies. Along with publishing songs and broadsides, Lloyd dominated the fiction market in the early Victorian period issuing Gothic stories such as Varney the Vampire (1845-7) and other 'penny dreadfuls', which became bestsellers. Lloyd's publications introduced the enduring figure of Sweeney Todd whilst his authors penned plagiarisms of Dickens's novels, such as Oliver Twiss (1838-9). Many readers in the early Victorian period may have been as likely to have encountered the author of Pickwick in a Lloyd-published plagiarism as in the pages of the original author. This book makes us rethink the early reception of Dickens. In this interdisciplinary collection, leading scholars explore the world of Edward Lloyd and his stable of writers, such as Thomas Peckett Prest and James Malcolm Rymer. The Lloyd brand shaped popular taste in the age of Dickens and the Chartists. Edward Lloyd and his World fills a major gap in the histories of popular fiction and journalism, whilst developing links with Victorian politics, theatre and music.
Visa hela texten

Sarah Louise Lill was awarded her PhD from Northumbria University in 2015 for a thesis entitled '"The Father of the Cheap Press": Edward Lloyd and the Mass-Market Periodical, 1830-1855'. She now divides her time between conducting research in the field of Victorian periodicals and working as the Marketing and Communications Officer for CAPA College, Wakefield. She has contributed an entry on Edward Lloyd to the Companion to Victorian Popular Fiction, edited by Kevin Morrison (McFarland, 2018). Rohan McWilliam is Professor of Modern British History at Anglia Ruskin University and a former president of the British Association for Victorian Studies. He is the author of The Tichborne Claimant: A Victorian Sensation (2007) and has co-edited (with Kelly Boyd) The Victorian Studies Reader (2007) and (with Jonathan Davis) Labour and the Left in the 1980s (2017). He has written articles about Victorian melodrama, G.W.M. Reynolds, Elsa Lanchester and Jonathan Miller.