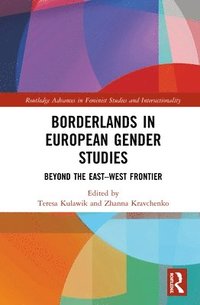 Beyond the East-West Frontier

av Teresa Kulawik, Zhanna Kravchenko
Inbunden Engelska, 2019-10-23
1564
Köp
Spara som favorit
Finns även som
Visa alla 3 format & utgåvor
Challenging persistent geopolitical asymmetries in feminist knowledge production, this collection depicts collisions between concepts and lived experiences, between academic feminism and political activism, between the West as generalizable and the East as the concrete Other. Borderlands in European Gender Studies narrows the gap between cultural analysis and social theory, addressing feminist theory's epistemological foundations and its capacity to confront the legacies of colonialism and socialism. The contributions demonstrate the enduring worth of feminist concepts for critical analysis, conceptualize resistance to multiple forms of oppression, and identify the implications of the decoupling of cultural and social feminist critique for the analysis of gender relations in a postsocialist space. This book will be of import to activists and researchers in women's and gender studies, comparative gender politics and policy, political science, sociology, contemporary history, and European studies. It is suitable for use as a supplemental text for advanced undergraduate and graduate courses in a range of fields.
Visa hela texten

With excellently chosen problematic topoi as its distinctive focus in gender studies dialogues within and beyond the East-West divide, this book speaks about the complexity of feminist agency toward current streams in theoretical discourses nowadays affected by neoliberalism, capitalism and hegemony of conservativism. This theoretically provocative volume explores to what extent a post-colonial perspective can be a vitalizing means to examining the role of post-East feminisms within a new global configuration along with a fresh revision of one's own Marxist heritage and its potential. - Biljana Kasic, Feminist Theorist, University of Zadar/Centre for Women's Studies, Zagreb, Croatia. A brilliant and challenging critique of hegemonic East/West, North/South, and three-world narrative cartographies of feminist theory from the positionality and epistemic lens of the Eastern European borderlands and post-state socialism. Theorizing Eastern Europe and the Balkans as the European "Other", Borderlands traces a "cartography of absences" and makes a compelling argument for the significance of multiple, relational boundaries and borderlands as fundamental to a newly inclusive and capacious radical feminist project. A book that belongs on the bookshelves of all radical scholar-activists engaged in struggles for gender and economic justice globally. - Chandra Talpade Mohanty, Professor of Women's and Gender Studies, Syracuse University. This is a stunning and important critique. It brings a new perspective to the history of post-state socialism, thus "provincializing" the story Western academic feminism has long told about itself. The introduction provides a compelling reassessment of the terms of (Western) feminist theory, exposing its debt to Cold War epistemologies. The essays nicely demonstrate how new knowledge can be produced when the boundaries between East and West are courageously transgressed. - Joan Wallach Scott, Professor emerita at the School of Social Science, Institute for Advanced Study, Princeton University.

Teresa Kulawik is Professor of Gender Studies at Soedertoern University. Her current research examines the intersections between body/bio politics, biomedicine, feminism, citizenship, and public knowledge regimes. Her monograph Bodies, Nations, and Knowledge: Political Epistemologies in Germany, Poland, and Sweden in Historical Perspective is forthcoming. Zhanna Kravchenko is Senior Lecturer in Sociology, School of Social Sciences, Soedertoern University. Her research has been focused on welfare policy, specifically, on family policies, housing policies, and urban planning, as well as on transition to adulthood and development of civil society in Russia.