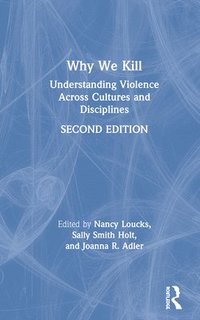 Understanding Violence Across Cultures and Disciplines

av Nancy Loucks, Sally Smith Holt, Joanna R Adler
Inbunden Engelska, 2020-03-31
1839
Köp
Spara som favorit
Skickas inom 5-8 vardagar.
Fri frakt inom Sverige för privatpersoner.
Finns även som
Visa alla 5 format & utgåvor
Capital punishment, serial killings, war, terrorism, abortion, honour killings, euthanasia, suicide bombings, war, and genocide: all involve the taking of life. Put most simply, all involve killing other people. However, cultural context heavily influences heavily how people perceive these acts, and most people reading this paragraph will likely disagree on the extent to which these "count" as killing. For such an evolved species, humans can be violent far beyond the point of humanity. Why We Kill examines this violence in its many forms, exploring how culture plays a role in people's understanding and definition of violent action. From the first chapter, which examines "conventional" homicide, to the final chapter's bone-chilling account of the Rwandan genocide, this fascinating book makes compelling reading.
Visa hela texten

"This is an interesting and provocative book which will prove useful for readers in all areas of academic study.... The interdisciplinary approach coupled with varying types of killing provides a fresh outlook on why individuals kill in the first instance. Why We Kill is enthusiastically recommended to anyone interested in the study of killing or fascinated with the reasons for, and justifications of, why people behave the way they do." - Rachelle M. Larocque, Institute of Criminology, University of Cambridge, in The Howard Journal 49(5), December 2010 (review of the first edition) "The essays are consistently informed and insightful, and the editors have succeeded in exploring the 'contextual, multi-layered and complex manifestations' of killing in this timely volume that will be useful to scholars and accessible to general readers. Summing Up: Highly recommended. All levels/libraries." - Lloyd Steffen, Professor of Religion Studies and Director, Center for Dialogue, Ethics and Spirituality, Lehigh University, in CHOICE 47(11), July 2010 (review of the first edition)

Bloggat om Why We Kill

Prof. Nancy Loucks OBE, B.A. in Criminology cum laude, M. Phil. and Ph.D. in Criminology (Cantab), is Chief Executive of Families Outside, a national Scottish charity that works on behalf of families affected by imprisonment, as well as Visiting Professor at the University of Strathclyde's Centre for Law, Crime & Justice. Prof. Loucks's work has included extensive research in criminology including the imprisonment of women, aspects of prison discipline and control, violence and bullying, use of drugs and alcohol, suicides and self-injury, and the impact of imprisonment on prisoners' families. Other projects have included research into the employment of people with a criminal record in the European Union, human rights aspects of religious communities in prisons, and risk assessment of serious sexual and violent offenders. Prof. Loucks was awarded an Order of the British Empire in the 2016 New Year's Honours list for services to Education and Human Rights. Prof. Joanna R. Adler, Head of the Department of Psychology and Sport Sciences, University of Hertfordshire, B. Sc. (hons); M. Phil. (Cantab.); Ph.D.; C. Psychol. Forens.; FHEA is a professor in Forensic Psychology. She has conducted research in areas including fear, power, and victimisation in prisons; effects of fear of crime on psychological well-being; intra-familial violence; police stress; the punishment of young offenders; radicalisation of "at risk youth" and hate crimes. Dr. Sally Smith Holt, School of Religion, Belmont University B.A., M. Div., M. A., Ph.D. earned her Ph.D. from the Graduate Department of Religion at Vanderbilt University. She is interested in philosophical and theological ethics and related issues of justice. Much of her current work focuses on world religions and possibilities for dialogue. She works with study abroad programs in Spain and also serves as Site Coordinator for Central Seminary. Dr. Holt is a professor of religion at Belmont University in Nashville, TN.