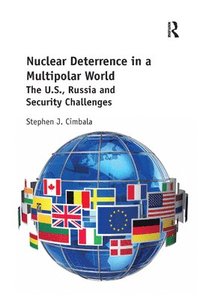 Nuclear Deterrence in a Multipolar World

The U.S., Russia and Security Challenges

'Before the US and Russia embark on trillion dollar modernization programs for their nuclear arsenals, they should pay attention to the points made in Steve Cimbala's latest book. Cimbala demonstrates clearly that, despite their differences on issues such as Syria and Ukraine, America and Russia do have realistic options for nuclear arms reductions. These reductions will not only save the two nations billions of dollars, but will help limit the spread of nuclear weapons. This book should be required reading for civilian and military graduate schools that focus on national security.' Lawrence Korb, Center for American Progress, USA 'Cimbala's latest work provides an up-to-date look at the state of nuclear deterrence in a global context. In couching his discussion within the Russo-American competition, Cimbala also covers the nuclear competition between the United States and its other nuclear competitors. Readable and concise, this work is well worth the time.' Adam Lowther, Air University, USA

Stephen J. Cimbala is Distinguished Professor of Political Science at Penn State Brandywine. Dr Cimbala is an award winning Penn State teacher and the author of numerous works in the fields of national security studies, nuclear arms control and other topics.