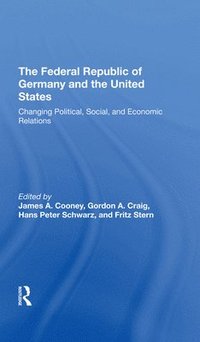 The Federal Republic Of Germany And The United States

Bloggat om The Federal Republic Of Germany And The U...

Westview Replica Editions -- Foreword -- The Context of German-American Relations: An Introduction -- Germany and the United States: Some Historical Parallels and Differences and their Reflection in Attitudes toward Foreign Policy -- Cultural Change and Generation Change in Postwar Western Germany -- The West Germans, Western Democracy, and Western Ties in the Light of Public Opinion Research -- Religion and Politics in Germany and in German- American Relations -- The Integration and Divergence of German and American Economic Interests -- The Economic Relations of the Federal Republic of Germany and the United States of America -- American Forces in the Federal Republic: Past, Current and Future -- Squaring Many Circles: West German Security Policy between Deterrence, Detente and Alliance -- Policy Implications of Development and the Present Status of U.S.-German Relations: A German Point of View -- Sustaining the American- German Relationship in a Time of Strategic and Attitudinal Change -- Conclusion: German-American Relations and "The Return of the Repressed"