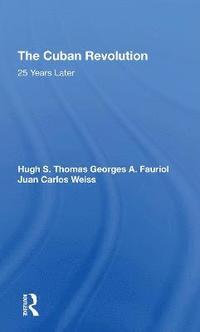 av Georges A Fauriol, Juan Carlos Weiss, Hugh Thomas Of Swynnerton, Hugh S Thomas
Häftad Engelska, 2021-05-31
601
Köp
Spara som favorit
Finns även som
Visa alla 3 format & utgåvor
January 1984 marked the 25th anniversary of Fidel Castro's emergence to power. The Cuban Revolution: 25 Years Later is a product of the CSIS Cuba Project, a long-term effort to focus public as well as policymaker's attention on Cuba-related affairs. The lead author, Lord Thomas of Swynnerton, is the dean of political-historical studies on Cuba, and author of the encyclopedic Cuba: The Pursuit of Freedom. A great deal of myth surrounds the evolution of Cuba since Castro's emergence to power over 25 years ago. Some of this myth is the product of official Cuban propaganda; some of it is also due to a generally misinformed American public. Sifting through available data to distinguish between fact and fiction, this book evaluates broadly the impact of Castro's regime on Cuba itself. Based on the findings of the CSIS Cuba Project, the book draws on the assessments of 18 top Cuban specialists on the political, economic, cuiturai, and social development of Cuba since 1959. In contrast to democracies such as Costa Rica, the equalization of society that has taken place under Castro's leadership has been accomplished by redistributing existing resources, not by creating new wealth. Moreover, the authors conclude that in politics, culture, and the economy, Cuba under Castro has become and remains rigid, stagnant, enormously militarized, and ideologically absolutist.
Visa hela texten

"Hugh S. Thomas-Lord Thomas of Swynnerton-an eminent historian and foreign policy adviser to British Prime Minister Thatcher, is currently Chairman of the Centre for Policy Studies, a leading British think tank. Educated at Cambridge University and at the Sorbonne, Lord Thomas served in the British Foreign Office and later became United Kingdom delegate to the United Nations. He also taught at the Royal Military Academy, Sandhurst, before becoming Professor of History and Chairman of Graduate Studies at the University of Reading, where he taught until 1976. Lord Thomas is the author of Cuba: The Pu rsuit of Freedom. He has also published The History of the Spanish Civil War (1961), The Suez Crisis (1967), and The History of the World (1979). Lord Thomas is the chairman of the CSIS Cuba Project working groups. Dr. Georges Fauriol is a Fellow in Caribbean Basin Studies at the Georgetown University Center for Strategic and International Studies (CSIS). He is currently Director of the CSIS Cuba Project (the basis for this volume), the Immigration and National Security Project, as well as other Caribbean Basin efforts. He was previously associated with the Foreign Policy Research Institute and worked at the Inter-American Development Bank. Dr. Fauriol is the author of several publications: Guatemala and Central America's Northern Flank, Caribbean Basin Security (co-authored with Admiral Thomas Moorer), The FAO, Immigration Policy and the National Interest, The Foreign Policy Behavior of Caribbean States, "Caribbean Basin Environment: Policy Responses in the 1980s"in Strategic Responses to Conflict in the 1980s, and "The Americas"in Strategic RequireOE3/4 mentsfor the Army to the Year 2000. Juan Carlos Weiss is a Research Assistant in the Latin American Studies Program at CSIS. He has worked on Latin American foreign policy, security, and economic issues, particularly concerning Cuba, Mexico, and Brazil. He, along with William Perry, is the coauthor of "The Brazilian Defense Industry: Combining National Security With Commercial Success"(forthcoming 1984), "Lessons of the Cuban Revolution"(Washington Quarterly Winter Issue 1984) and co-editor and contributor to Latin American Insurgency Movements (forthcoming 1984). Mr. Weiss is the rapporteur for the CSIS Cuba Project."