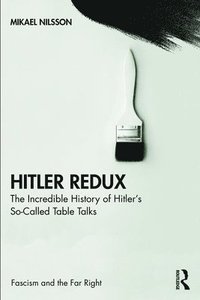 av Mikael Nilsson
Häftad Engelska, 2020-09-16
429
Köp
Spara som favorit
Skickas inom 5-8 vardagar.
Fri frakt inom Sverige för privatpersoner.
Finns även som
Visa alla 3 format & utgåvor
After Hitler's death, several posthumous books were published which purported to be the verbatim words of the Nazi leader - two of the most important of these documents were Hitler's Table Talk and The Testament of Adolf Hitler. This ground-breaking book provides the first in-depth analysis and critical study of Hitler's so-called table talks and their history, provenance, translation, reception, and usage. Based on research in public and private archives in four countries, the book shows when, why, where, how, by and for whom the table talks were written, how reliable the texts are, and how historians should approach and use them. It reveals the crucial role of the mysterious Swiss Nazi Francois Genoud, as well as some very poor judgement from several famous historians in giving these dubious sources more credibility than they deserved. The book sets the record straight regarding the nature of these volumes as historical sources - proving inter alia The Testament to be a clever forgery - and aims to establish a new consensus on their meaning and impact on historical research into Hitler and the Third Reich. This path-breaking historical investigation will be of considerable interest to all researchers and historians of the Nazi era.
Visa hela texten

"Seventy-five years after his death in the ruins of Berlin, Adolf Hitler remains an enigma, in large part because we still rely largely uncritically on sources produced by Hitler and his entourage. Mikael Nilsson's magnificently researched and brilliantly argued Hitler Redux: The Incredible History of Hitler's So-Called Table Talks brings us much closer to understanding Hitler. By dissecting how Hitler's 'Table Talks' were compromised and revealing The Testament of Adolf Hitler to be a cover forgery, Nilsson manages to unmask Hitler." - Thomas Weber, University of Aberdeen, UK "Nilsson's book provides historical research at its best. Grounded in exhaustive study of primary sources he paints a gripping picture of how historiography for far too long followed misleading narrartives. His fascinating findings provide lessons for historians and the wider public how to apply critical rationality and shrewd analysis of documents. It's a feast of enlightenment." - Magnus Brechtken, University of Munich, Germany "In a series of hard-hitting and well-researched articles, Mikael Nilsson has shown that Hitler's fabled 'Table-talk' and 'Political Testament' cannot be used as direct evidence of what he actually said. His work is essential reading for anyone wishing to understand the challenges which his biographers face." - Brendan Simms, University of Cambridge, UK "Mikael Nilsson provides an unsparing but long-overdue critique of one of the touchstone sources of Hitler scholarship. Future biographers will be well-served to read Nilsson's meticulously researched analysis before turning to Hitler's table talk conversations and monologues. Hitler Redux is fascinating, sobering, enlightening." - Timothy W. Ryback, Director of the Institute for Historical Justice and Reconciliation in Paris, France

Mikael Nilsson is a currently unaffiliated Swedish historian who has written and published extensively on the Cold War and on Hitler's table talks. Previously he has been a researcher and teacher of history and military history at the Royal Institute of Technology, the Swedish National Defense College, Stockholm University, and Uppsala University. His research interests have mainly been related to Swedish-American military technological collaboration and US propaganda activities in Scandinavia during the Cold War, as well as Hitler, National Socialism, and Nazi Germany in general.

1. The Table Talks: How Were They Made and How have Historians Used Them? 2. A Scholarly Scandal: The Publication of Henry Picker's Hitlers Tischgesprache in 1951 3. Francois Genoud and His Table Talk Manuscript 4. The Heim Proof Pages: How A Revolutionary Discovery and Its Implications Went Unnoticed 5. The Publication of Hitler's Table Talk and the Role of Hugh Trevor-Roper 6. The Testament of Adolf Hitler: The Last Table Talk or A Clever Forgery? 7. Werner Jochmann and the Monologe im Fuhrerhauptquartier Edition: The Publication of Genoud's "Original" Manuscript 8. Conclusions