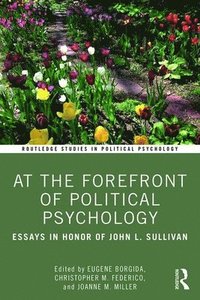 At the Forefront of Political Psychology

av Eugene Borgida, Christopher M Federico, Joanne M Miller
Häftad Engelska, 2020-02-19
469
Bevaka
Spara som favorit
Ännu ej utkommen – klicka "Bevaka" för att få ett mejl så fort boken boken går att köpa.
Finns även som
Visa alla 1 format & utgåvor
At the Forefront of Political Psychology pays tribute to John L. Sullivan, one of the most influential political psychologists of his generation. Sullivan's scholarly contributions have deeply shaped our knowledge of belief systems and political tolerance, two flourishing research areas in political psychology that are crucial to understanding the turbulence of our times. This volume, compiled by three of Sullivan's longtime colleagues and collaborators, includes cutting-edge contributions from scholars in political science and psychology. The book is divided into three sections; the first two focus on how Sullivan's work on political tolerance and belief systems influenced generations of political psychologists. The final section offers a more personal look at Sullivan's influence as a mentor to young scholars, many of whom are now intellectual leaders in political psychology. The chapters featured here elucidate how these students were able to flourish under Sullivan's tutelage and lifelong mentorship. One of John L. Sullivan's defining traits is his generosity-as a scholar, mentor, leader, and friend. Over the years, many have benefited greatly from Sullivan's willingness to share his intellect, insight, and passion for democratic values. This impressive collection will appeal to both students and professors of political psychology, but also scholars of social and political behavior, political tolerance, and anyone who has an interest in the contributions made by Sullivan.
Visa hela texten

"This volume provides the reader with a comprehensive and carefully drawn discussion of the ideas and influence of one of the most impactful scholars within the ever growing field of political psychology. It is a must-read for those scholars, educators and policy makers interested in the psychology of political and social intolerance." - Jim Sidanius, John Lindsley Professor of Psychology in Memory of William James, Harvard University "In this volume a distinguished group of political scientists and psychologist pay tribute to John Sullivan. Their work builds in important ways on Sullivan's legacy, updating and extending his seminal insights into political tolerance and ideological reasoning. Perhaps just as importantly, the volume celebrates Sullivan's role as a valued research colleague and mentor. Its contents are inspiring, informative, and a must-read for political psychologists." - Leonie Huddy, Professor of Political Science, Stony Brook University

Bloggat om At the Forefront of Political Psychology

Eugene Borgida is a professor of psychology and law at the University of Minnesota. He is a Morse-Alumni Distinguished Professor of Psychology. In addition, Borgida is an adjunct professor of political science and has served as co-director of the Center for the Study of Political Psychology, which he co-founded, and co-editor of the journal Political Psychology. He is a fellow of the Association of Psychological Science (APS), a fellow in several divisions of the American Psychological Association, and an elected fellow of the American Association for the Advancement of Science. He has served on the board of directors for the APS, the Social Science Research Council, and the Federation of Associations in Behavioral & Brain Sciences. Borgida's research interests include social cognition, attitudes and persuasion, psychology and law, and political psychology. Christopher M. Federico is a professor in the Departments of Political Science and Psychology at the University of Minnesota. His interests focus on mass belief systems, the psychological foundations of political preferences, and intergroup attitudes and behavior. He is also currently the Director of the Center for the Study of Political Psychology at the University of Minnesota. His research has been supported by the National Science Foundation. He is a co-author of Open Versus Closed: Personality, Identity, and the Politics of Redistribution (with Christopher D. Johnston and Howard G. Lavine), winner of the 2018 David O. Sears Award from the International Society of Political Psychology for the best book published in the field of the political psychology of mass politics. Joanne M. Miller is an associate professor in the Departments of Political Science and International Relations and of Psychological and Brain Sciences at the University of Delaware. Her research has been funded by the National Science Foundation and the Pew Charitable Trusts and has won awards from the following American Political Science Association sections: Elections, Public Opinion, and Voting Behavior; Political Communication; and Political Organizations and Parties. Her interests focus on political psychology, with particular emphases on the processes by which citizens form political attitudes and become politically engaged and on the psychological antecedents of belief in conspiracy theories.