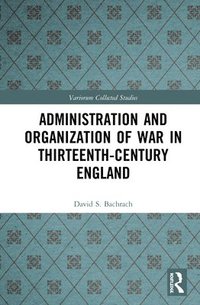 Administration and Organization of War in Thirteenth-Century England

av David S Bachrach
Inbunden Engelska, 2020-03-31
1489
Köp
Spara som favorit
Skickas inom 7-10 vardagar.
Fri frakt inom Sverige för privatpersoner.
Kan levereras innan jul!
Finns även som
Visa alla 2 format & utgåvor
The essays brought together in this volume examine the conduct of war by the Angevin kings of England during the long thirteenth century (1189-1307). Drawing upon a wide range of unpublished administrative records that have been largely ignored by previous scholarship, David S. Bachrach offers new insights into the military technology of the period, including the types of artillery and missile weapons produced by the royal government. The studies in this volume also highlight the administrative sophistication of the Angevin kings in military affairs, showing how they produced and maintained huge arsenals, mobilized vast quantities of supplies for their armies in the field, and provided for the pastoral care of their men. Bachrach also challenges the knight-centric focus of much of the scholarship on this period, demonstrating that the militarization of the English population penetrated to men in the lower social and economic strata, who volunteered in large numbers for military service, and even made careers as professional soldiers.
Visa hela texten

David S. Bachrach, Professor of Medieval History at the University of New Hampshire,USA, is a specialist in the military, administrative, and governmental history of the English and German kingdoms during the Middle Ages. He has published numerous articles and books, including Warfare in Medieval Europe c.400-c.1453 (2016), Warfare in Tenth-Century Germany (2012), and Religion and the Conduct of War c.300-1215 (2003).