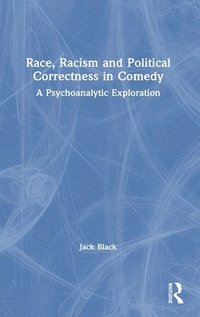 av Jack Black
Inbunden Engelska, 2021-04-26
2043
Köp
Spara som favorit
Finns även som
Visa alla 3 format & utgåvor
In what ways is comedy subversive? This vital new book critically considers the importance of comedy in challenging and redefining our relations to race and racism through the lens of political correctness. By viewing comedy as both a constitutive feature of social interaction and as a necessary requirement in the appraisal of what is often deemed to be 'politically correct', this book provides an innovative and multidisciplinary approach to the study of comedy and popular culture. In doing so, it engages with the social and cultural tensions inherent to our understandings of political correctness, arguing that comedy can subversively redefine our approach to 'PC Debates', contestations surrounding free speech and the popular portrayal of political correctness in the media and society. Aided by the work of both Slavoj Z iz ek and Alenka Zupanc ic , this unique analysis adopts a psychoanalytic/philosophical framework to explore issues of race, racism and political correctness in the widely acclaimed BBC 'mockumentary', The Office (UK), as well as a variety of television comedies. Drawing from psychoanalysis, social psychology and philosophy, this book will be highly relevant for postgraduate students and academic researchers studying comedy, race/racism, multiculturalism, political correctness and television/film.
Visa hela texten

'In our world today, where we struggle with the dissolution of community and trust in each other, with only the contractual communicative dimensions of political correctness as the tether to the social, what can we make of the underlying role of humour, comedy, and jokes, so often the source of offence and resentment? In Race, Racism and Political Correctness in Comedy, Jack Black shows us that the only way to achieve a proper universality under these conditions is through the subversive dimensions of comedy, itself. Drawing on the influential work of Lacanian theorists, such as Alenka Zupancic and Slavoj Zizek, Black teaches us about the politically subversive potentials of comedy, and how humour, more so than political correctness, is the only real way to go on the attack against social ills, like racism. Joining other leading Lacanian scholars, such as Zupancic and Todd McGowan, Black's book is sure to be a welcomed addition to the growing field of Lacanian studies of comedy.' - Matthew Flisfeder, author of Algorithmic Desire: Toward a New Structuralist Theory of Social Media 'This book provides a much-needed corrective to the asinine managerialist mindset that promotes the politically correct banality of safe spaces over the unpredictable challenges of critical thinking. Jack Black expertly demonstrates how the path to true seriousness is strewn with jokes. He puts the open-minded reader genuinely concerned about racism on the psychoanalyst's couch and reveals the various ways in which comedy is a highly resilient antidote to dominant ideological stupidities. University apparatchiks will not like this book - which is why I cannot recommend it highly enough.' - Paul Taylor, University of Leeds

Jack Black is a Senior Lecturer at Sheffield Hallam University. After completing his postgraduate studies at Loughborough University, his research has continued to explore the interrelationships between sociology, media and communications and cultural studies. Drawing upon 'traditional' media forms (newspaper analysis) as well as television and film studies, Jack's published work provides an interdisciplinary approach to the study of ideology, politics and power in both the media and popular culture.