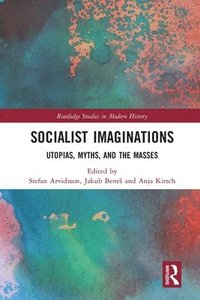 Utopias, Myths, and the Masses

av Stefan Arvidsson, Jakub S Benes, Anja Kirsch
Häftad Engelska, 2020-06-30
435
Köp
Spara som favorit
Finns även som
Visa alla 3 format & utgåvor
This volume offers new perspectives on the appeal and profound cultural meaning of socialism over the past two centuries. It brings together scholarship from various disciplines addressing diverse national contexts, including Britain, China, France, Germany, Norway, Sweden, and the USA. Taken together, the contributions highlight the aesthetic, narrative, and religious dimensions of socialism as it has developed through three broad phases in the modern era: early nineteenth-century beginnings, mass-based political organizations, and the attainment of state power in the twentieth century and beyond. Socialism did not attract millions of people primarily because of logical argument and empirical evidence, important though those were. Rather, it told the most compelling story about the past, present, and future. Refocusing attention on socialism's imaginative dimensions, this volume aims to revive scholarly interest in one of the modern world(1)s most important political orientations.
Visa hela texten

Stefan Arvidsson is professor in the history of religions at Linnaeus University, Sweden. His main interest concerns modern mythology. English publications include Aryan idols: Indo-European mythology as ideology and science (2006) and The style and mythology of socialism: socialist idealism, 1871-1914 (2017). Jakub Benes is lecturer in modern European history at the University of Birmingham. His research focuses on the culture of workers' and peasants' movements in nineteenth- and twentieth-century east central Europe. He is the author of Workers and Nationalism: Czech and German Social Democracy in Habsburg Austria, 1890-1918 (Oxford, 2017). Anja Kirsch is a post-doctoral researcher at the University of Basel whose main interest concerns the relation between religion and 'the secular' in contemporary and historical perspective. She specializes in the relation of religion and the socialist worldview in the German Democratic Republic (Weltanschauung als Erzahlkultur, 2016); her research interests include narrative strategies of secular and religious social-revolutionary movements and utopias and transnational migration in the long nineteenth-century European history of religions.