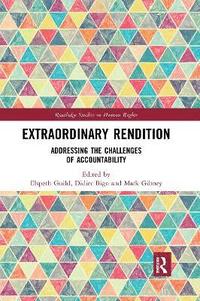 Addressing the Challenges of Accountability

av Elspeth Guild, Didier Bigo, Mark Gibney
Häftad Engelska, 2020-08-14
559
Köp
Spara som favorit
Finns även som
Visa alla 3 format & utgåvor
The US led programme of extraordinary rendition created profound challenges for the international system of human rights protection and rule of law. This book examines the efforts of authorities in Europe and the US to re-establish rule of law and respect for human rights through the investigation of the program and its outcomes. The contributions to this volume examine the supranational and national inquiries into the US CIA-led extraordinary rendition and secret detention programme in Europe. The book takes as a starting point two recent and far-reaching developments in delivering accountability and establishing the truth: First, the publication of the executive summary of the US Senate Intelligence Committee (Feinstein) Report, and second, various European Court of Human Rights judgments regarding the complicity of several state parties and the incompatibility of those actions with the European Convention of Human Rights and Fundamental Freedoms (ECHR). The collective volume provides the first stock-taking review of the state of affairs in the quest for accountability, and identifies significant obstacles in going even further -- as international law demands. It will be vital reading for students and scholars in a wide range of areas, including international relations, international law, public policy and counter-terrorism studies.
Visa hela texten

Didier Bigo is Professor of International Relations (and Maitre de conferences des universites) at Sciences-Po Paris, and Researcher at CERI/FNSP. Bigo is also Professor at Kings College London. Elspeth Guild is a Jean-Monnet Professor of European migration law at the Radboud University Nijmegen (The Netherlands). She is also Senior Research Fellow at the Centre for European Policy Studies in Brussels and a partner at the London law firm Kingsley Napley. Mark Gibney is the Carol Belk Distinguished Professor at the University of North Carolina-Asheville and an Affiliated Scholar at the Raoul Wallenberg Institute.

Introduction 1: The U.S. Senate Select Intelligence Committee Report (Feinstein Report) on the CIA Extraordinary Rendition Programme - Perspectives from Europe 2: Dramaturgy of suspicion and the emergence of a transnational guild of extraction of information by torture at a distance 3: Foreign "Liaison Partners" and the CIA's Economy of Detention 4: Extraordinary Renditions: A Practice Beyond Traditional Justice 5: The Polish Roadmap to Accountability: Why the Implementation of Al Nashiri and Abu Zubaydah Judgements is so Highly Problematic 6: The UK: the role of rendition and torture in the battle to end judicial deference 7: Extraordinary Rendition, Secrecy and the UK Security Constitution 8: The Quest for Absolution and Immunity: Justifying Past and Future Torture in the Name of Democracy 9: Extraordinary Rendition, the American Judiciary, and the Failure of the "Territorial" Approach in Both International and Domestic Law 10: Democratic Oversight and the CIA's Extraordinary Rendition Programme in Europe 11: The International Criminal Court Prosecutor's preliminary examination on Afghanistan and possible impacts on accountability for secret detention and rendition