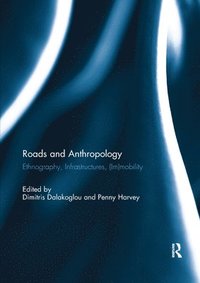 av Dimitris Dalakoglou, Penelope Harvey
Häftad Engelska, 2020-12-18
569
Köp
Spara som favorit
Finns även som
Visa alla 3 format & utgåvor
Roads and the powerful sense of mobility that they promise carry us back and forth between the sweeping narratives of globalisation, and the specific, tangible materialities of particular times and places. Indeed, despite the fact that roads might, by comparison with the sparkling agility of virtual technologies, appear to be grounded in twentieth century industrial political economy they could arguably be taken as the paradigmatic material infrastructure of the twenty-first century, supporting both the information society (in the ever increasing circulation of commoditized goods and labour), and the extractive economies of developing countries on which the production and reproduction of such goods and labour depends. Roads and Anthropology is the first collection of road ethnographies, edited by two pioneers in the anthropological explorations of infrastructures, the essays published in the book aim to pave the way for this rising field of anthropological research. This book was published as a special issue of Mobilities.
Visa hela texten

Dimitris Dalakoglou is a Senior Lecturer in Anthropology at the University of Sussex. He holds an ESRC Future Research Leaders grant studying urban infrastructures in Athens. His PhD (2009, UCL) was titled 'An Anthropology of the Road' and he is the author of The Road (2010, American Ethnologist) and co-editor of Revolt and Crisis in Greece (AK Press 2011). Penny Harvey is Director of CRESC (ESRC Centre for Research on Socio-Cultural Change) and Professor of Social Anthropology at the University of Manchester. She is co-author (with Hannah Knox) of Roads (forthcoming Cornell University Press), and co-editor or Objects and Materials: A Routledge Companion (Routledge 2013).

1. Roads and Anthropology: Ethnographic Perspectives on Space, Time and (Im)Mobility 2. Roadside Inventions: Making Time and Money Work at a Road Construction Site in Mozambique 3. Between the Material and the Figural Road: The Incompleteness of Colonial Geographies in Amazonia 4. Furrows and Walls, or the Legal Topography of a Frontier Road in Peru 5. The Enchantments of Infrastructure 6. Rush and Relax: the Rhythms and Speeds of Touting Perishable Products on a Ghanaian Roadside 7. Roads that Separate: Sino-Mongolian Relations in the Inner Asian Desert 8. 'The Road from Capitalism to Capitalism': Infrastructures of (Post)Socialism in Albania