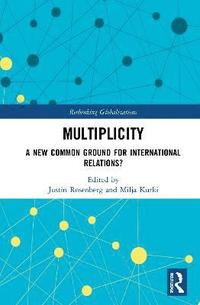 av Justin Rosenberg, Milja Kurki
Inbunden Engelska, 2021-05-11
1519
Köp
Spara som favorit
Kan levereras innan julafton!
Finns även som
Visa alla 2 format & utgåvor
This volume takes up the idea of 'multiplicity' as a new common ground for international theory, bringing together 10 scholars to reflect on the implications of societal multiplicity for areas as diverse as nationalism, ecology, architecture, monetary systems, cosmology and the history of political ideas. International relations (IR), it is often said, has contributed no big ideas to the interdisciplinary conversation of the social sciences and humanities. Yet this is an unnecessary silence, for IR uniquely addresses a fundamental fact about the human world: its division into a multiplicity of interacting social formations. This feature is full of consequences for the very nature of societies and for social phenomena of all kinds. And in recent years a research programme has emerged within IR to theorise these 'consequences of multiplicity' and to trace how the effects of the international dimension extend into other fields of social life. This book is a powerful indication of the contribution that IR may yet make to the human disciplines. The chapters in this book were originally published as a special issue of Globalizations.
Visa hela texten

Justin Rosenberg teaches International Relations at the University of Sussex, UK. His publications include The Empire of Civil Society (1994), The Follies of Globalization Theory (2000), 'International Relations in the Prison of Political Science' (2016) and numerous articles on Uneven and Combined Development. Milja Kurki is specialist in IR theory and interested in varied ways of thinking through how we think and act in international politics. She has recently published a monograph on relational cosmology and has previously written on causation, philosophy of science, democracy and democracy promotion, and social-natural science nexus.