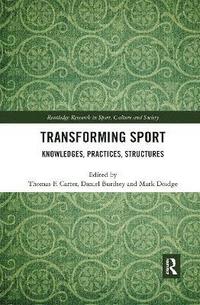 av Thomas F Carter, Daniel Burdsey, Mark Doidge
Häftad Engelska, 2019-12-06
459
Köp
Spara som favorit
Finns även som
Visa alla 3 format & utgåvor
Sport sociology has a responsibility to engage critically with the accepted wisdom of those who govern and promote sport. This challenging collection of international research is a clear call for enacting the transformation of sport. The contributing authors argue that it is not enough to merely advocate for change. Rather, they insist that scholars need to take an active political stance when conducting research with the explicit purpose of attempting to transform the practices, structures, and the ways in which knowledge is produced about sport. By exposing and challenging the power relations which perpetuate discrimination and inequality within sport, it becomes possible to catalyse wider societal changes. Drawing on a diversity of topics including sport for development and peace, transnational feminism, disability sport, refugees and football activism, FIFA, the Olympics, sports journalism and digital sports media, this book makes a case for sport sociology as an agent of positive change in the hierarchies and institutional structures of contemporary sport. Transforming Sport: Knowledges, Practices, Structures provides valuable insights for all students and scholars interested in the sociology of sport and its transformative potential.
Visa hela texten

1. 'Something has got to be done about this': Transforming Sport, Selves and Scholarship Part I: Knowledges 2. Refugees United: The Role of Activism and Football in Supporting Refugees 3. Agency and Intention Without Individualism: Some Methodological Pre-requisites? 4. Coming Out of Containment: Feminist Methodological Considerations for Researching Women in Sport 5. "The Point, However, Is to Change It": Critical Social Sciences and the Olympic Games 6. Transforming Methodological Nationalism: The Case of Sports Scholarship and Policy Towards Migrants and Descendants 7. Love Fighting Hate Violence: An Anti-Violence Program for Martial Arts and Combat Sports Part II: Structures 8. In Whose Humanity? 9. FIFA: Ethics, Voice and Organisational Power Plays 10. Exploring the Growth of the Commonwealth Games 11. Transforming Power Relationships Within Grassroots and Professional Football to Engender Social Change: Re-Visiting the Exclusion of British Asians Part III: Practices 12. Transforming Informal Communities Through Discourse Intervention: RioOnWatch, Favelas and the 2016 Olympic Games 13. Putting the P in SDP: Sport and Peace-Building in Divided Societies: The Origins and Evolution of Critical Proactivism 14. Earnest Travellers: Bodies (that) Matter in Transnational Feminist Research 15. Sports Journalism and Cultural Authority in the Digital Age16. Sport Media Texts and Audiences: A Critical Overview of Issues, Interactions and Interventions 17. Through the Lens of Hillsborough: The Truth, Archival Remixes and Critical Sociology 18. Transformation, Advocacy and Voice in Disability Sport Research