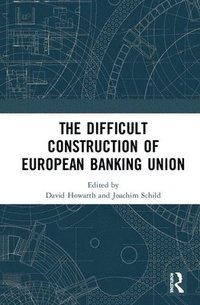 av David Howarth, Joachim Schild
Inbunden Engelska, 2020-04-07
1453
Köp
Spara som favorit
Kan tyvärr inte levereras innan julafton.
Finns även som
Visa alla 2 format & utgåvor
The Difficult Construction of European Banking Union examines the political, legal and economic issues surrounding the lacunae and design faults of European Banking Union and its problematic operation. The volume brings together the work of sixteen scholars focused on the diverse debates surrounding the construction and operation of Banking Union (BU), and its necessary reform. BU represents one of the most important developments in European integration since the launch of Monetary Union. Furthermore, the design of the BU agreed between 2012 and 2014 was a messy compromise among EU member states. It is not surprising then that BU has sparked a lively academic debate and triggered an ever-growing number of publications from different disciplinary backgrounds. The first wave of academic work on BU focuses upon the economic rationale underpinning the supranationalisation of control over banking - regulation, supervision, support and resolution - and the political dynamics and legal issues that shaped the design of the Union agreed. This volume is located at the intersection of this first phase of academic research and a second stage which analyses the functioning of the different elements of BU. New research questions are triggered by the albeit limited empirical evidence on BU's implementation and operation. Contributions to this second wave of research attempt to identify potentially dangerous lacunae and contribute to on-going reform debates. The Difficult Construction of European Banking Union will be of great interest to scholars of the European Union, Banking, Economic Governance, and Political Economy. Most of the chapters were originally published as three special issues in the Journal of Economic Policy Reform.
Visa hela texten

David Howarth is Professor of European Political Economy at the University of Luxembourg and a former Jean Monnet Chair at the University of Edinburgh. He is the author or co-author of numerous works on EU economic governance, including The Political Economy of Banking Union, 2016. Joachim Schild is Professor of Comparative Politics at Trier University, Germany. He published on Franco-German relations, French European Policy and the political economy of European integration. He co-authored (with Ulrich Krotz) Shaping Europe: France, Germany, and Embedded Bilateralism from the Elysee Treaty to Twenty-First Century Politics, 2013.